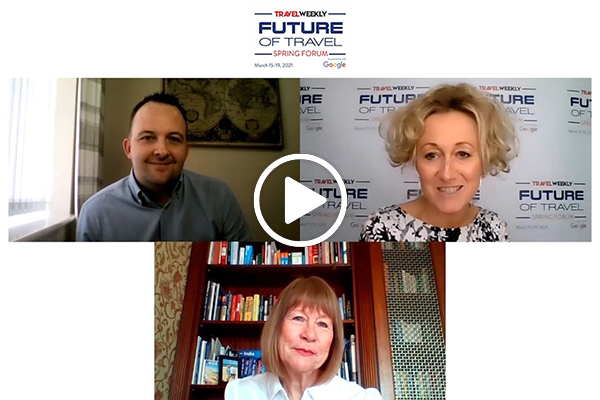 The boss of Hays Travel believes the industry is facing “a very mixed picture across the summer with uncertainty in some places running through into the autumn”.

Speaking at Travel Weekly’s Future of Travel Spring Forum, the independent agency’s chair Dame Irene Hays, said: “Clearly, there’s a lot of uncertainty about what happens with the report from the Global Travel Taskforce.

“In terms of passports, if they’re around vaccines, or if they’re around testing, or a combination of the two, and we’re still hearing that different countries will have different views on the subject, that level of uncertainty will still be a problem.

“We do know that the main markets, so Turkey, or Spain, or Greece – they will take British tourists without any passports at all. So the main markets for our country, and our business, will still, I hope, be accessible to all.”

But Hays added: “Even with forthcoming deadlines, and announcements [from the government], I still believe that it will be a very mixed picture across the summer, with uncertainty in some places running through into the autumn.

“The sooner all the main [holiday] destinations get vaccination levels to the equivalent of where ours will be by the summer has got to be the best option.”

Hays said the business had seen an instant increase in demand following the Prime Minister’s roadmap out of lockdown announcement on February 22, but demand had levelled off since.

“Immediately after Boris’s announcement, we definitely did [see an uptick]. In fact, we had a 370% increase in the number of enquiries. We took the decision to bring in another 200 colleagues just to answer the phones and make sure we continued the great customer care,” she said.

“Since that time, I have to be honest, it’s plateaued. We’ve had a couple of increases depending on announcements that have been made, but my understanding is that pretty much everyone’s in a similar position. So I think we’re doing okay. But that surge hasn’t continued.”

Hays said many enquiries were translating to firm bookings, but she added that it was extremely difficult to give accurate advice to customers while the picture continued to change.

“It’s really difficult to answer [customers’ questions] simply because it’s a very complex and ambiguous picture,” she said. “It’s all nuanced, and then you get into the differences of the terms and conditions of each of our suppliers as well. So you’ve got an over-layer of complexity, when you’re trying to give a nice, easy, simple answer to any of those queries.

“The more specific the customer can be about where they want to go to and when they’d like to travel, the better. We’re still seeing the majority of the bookings coming in for 2022 but we did see an uplift in bookings for summer 2021 last week. And obviously lots of people have still got the holidays that they had booked for 2020, which have been carried over to 2021.”