To check out all the updates from this morning’s activity around the Travel Day of Action, click here.

Travel Weekly spoke to figures representing travel agents, tour operators, airlines, trade associations and many others, hear what they had to say here

We’ll be continuing our coverage of this afternoon’s events here, so keep checking back for the latest updates, interviews and social media activity from Westminster, Holyrood, Belfast and other locations across the UK

End of our live coverage

5.30pm: With the lobbying events over at Westminster, Holyrood and Stormont, that wraps up our live coverage from today’s Travel Day of Action. Thank you for joining us and look out for plenty more coverage on travelweekly.co.uk and in next week’s edition of the print magazine.

Day of Action comes to a close

And that’s a wrap here on College Green! Thank you to all the organisers, everyone for coming and to everyone who spoke up for travel on social media and around the country today!

Day of Action gets transatlantic support 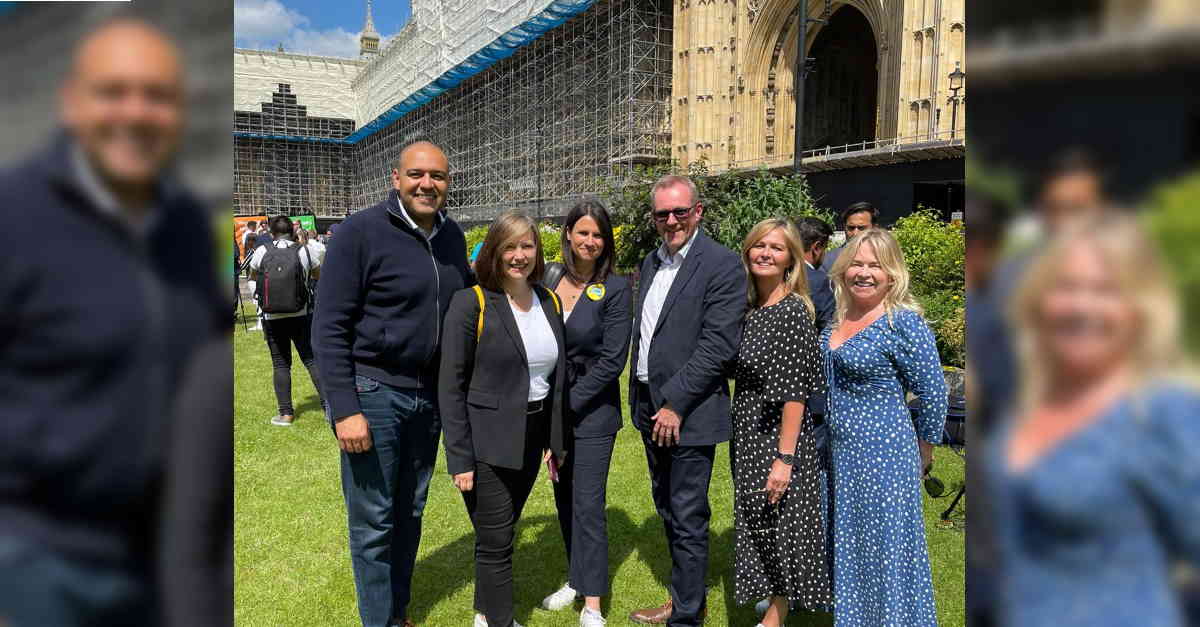 Oshiokpekhai said: “As one of the last industries standing, 15 months on, without trade or industry-specific support – we need immediate intervention to establish a sustainable, transparent and comprehensive global travel recovery plan. Not a string of false promises, mismatched information and changes at the eleventh hour.”

Mike Batt, chairman of Internova, which also owns Barrhead Travel, said from the US: “The UK outbound travel industry has been on house arrest since March 2020, but enough is enough. We need action and answers now. The industry cannot remain in this oblivion for any longer as the consequences of delaying the reopening of UK travel would be severe and would have a worldwide ripple-effect across the entire travel ecosystem.

“International travel must be a priority for the UK government.” 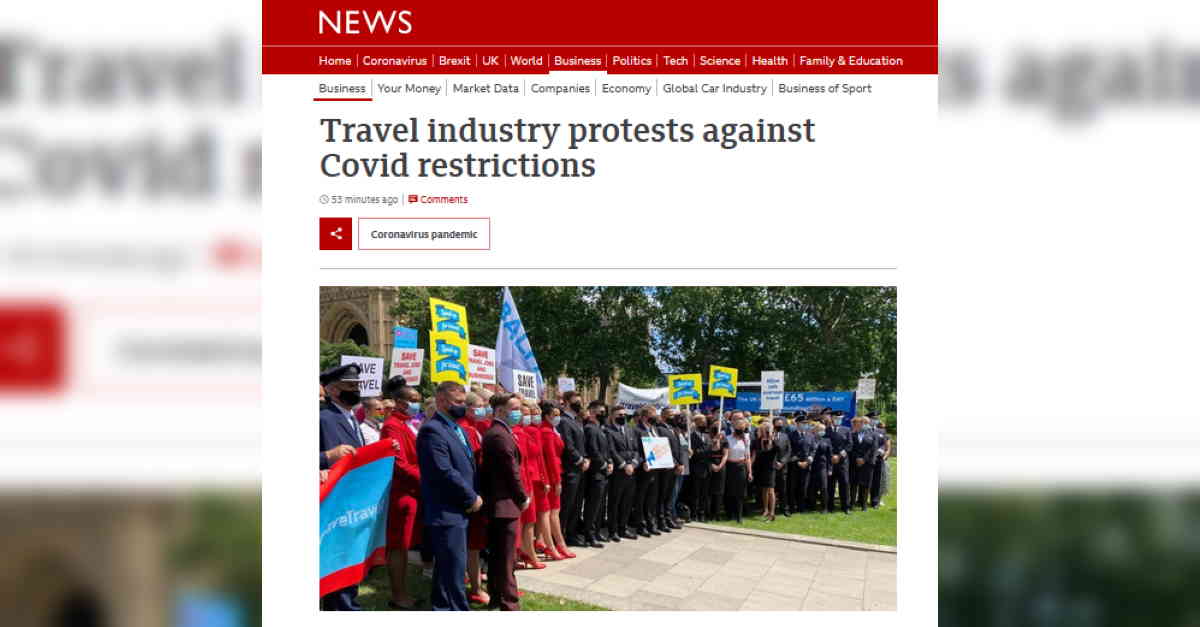 4.55pm: The Travel Day of Action has hit headlines in newspapers, TV and radio bulletins across the country as the industry puts pressure on the government to act.

The BBC reported: “Hundreds of travel professionals have gathered outside the Houses of Parliament – and in cities up and down the UK – to draw attention to the ongoing struggles of the industry and ask for government support.”

On #TravelDayOfAction, I met Mitzi and heard about how her business had been affected. We need International Safety Standards to get our planes back in the air and tailored financial support until they are. #SpeakUpForTravel@ABTAtravelpic.twitter.com/u8qx4TU67y

4.20pm: The SPAA has voiced its disappointment that no Scottish ministers joined its Day of Action protest at Holyrood on Wednesday.

President Joanne Dooey said: “While we met with 15 MSPs during the event, we were disappointed that we were not joined by any of the Scottish ministers but we believe we delivered our messages with integrity and passion.

“We now turn to the UK government and devolved nations to revert with a clear and practical plan to reopen travel and support our industry.”

‘The industry has been forgotten’

4.10pm: Chris Harrison, managing director of 21-branch Dawson & Sanderson, said: “We as an industry have had to survive on 5% to 10% of our usual revenues, from which we have had to pay out refunds.

“I think the industry has been forgotten by a government that doesn’t understand the structure of our industry. We either need a traffic light system that is transparent and taken seriously, or we need tailored support as an industry. We need to make the government listen. There is metric evidence that borders can open.” 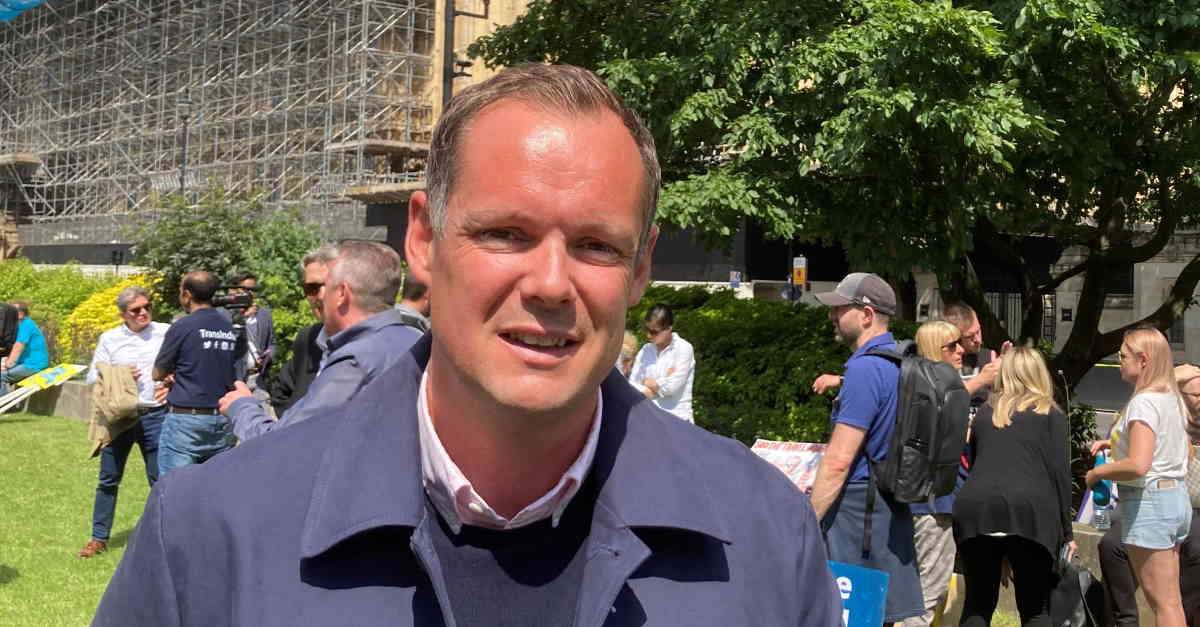 Agents have their say

4pm: Members of the Travel Weekly team spoke to a range of agents about their experiences at the Westminster Day of Action.

Janet Lacey, Not Just Travel: “With vaccinations and testing, travel should be able to open up, with a bit of common sense. It was easier to go abroad last summer. What’s it going to take to understand that when businesses go under, they’re not coming back?” #speakupfortravelpic.twitter.com/2SYXX65htv

Natalie Stacey, Designer Travel: “We have been promised so much but it’s the uncertainty – we can’t advise our clients or forecast anything. The traffic light system is so ambiguous and open to interpretation. If you look at the data, it doesn’t make sense.” #speakupfortravelpic.twitter.com/mLCxQHeD1f

Pat Curtis, Pat Curtis Travel in Coventry: “We want to get our voices heard. We do matter! We need travel to open up safely. There are so many countries that are on board with the vaccine. As long as we’ve had two vaccines and are prepared to do a test, why can’t we do the same?” pic.twitter.com/uBQ7jdeXEX

Tony Mann, of Idle Travel, on the @travelweekly bus just now. He says: “We’re here because we are at the end of our tether. We’re in a worse position than we were in last summer! I am still so angry. I am not sure we’re going to get people away this summer.” #speakupfortravelpic.twitter.com/k7plwLbYzn

.@baldwinstravel’s Nick and Chris Marks on the @travelweekly battle bus today. Nick said: “We just need to get parliament organised and get them to pull their finger out. The councils and MPs’ responses have been so standard.” #TravelDayOfAction#speakupfortravelpic.twitter.com/6mSqruF2ui

3.53pm: Instantly recognisable crew members from Virgin Atlantic, British Airways and easyJet were among those gathering at Westminster.

It’s time to #SpeakUpForTravel. Today we stand with our colleagues, partners and competitors across our industry for the #TravelDayofAction, calling on the Govt for the safe reopening of the skies. pic.twitter.com/iwWjcAZxme

We’re in London today joining 100s of colleagues from across the travel industry to ask the UK Government to allow international travel to return safely. Follow us as we #SpeakUpForTravelpic.twitter.com/nLpmiyYjNn

3.30pm: Organisers of the Belfast Day of Action hailed the response of the trade after more than 150 people supported the event.

Damian Murphy, director and manager at Terra Travel and spokesman for the Association of Northern Ireland Travel Agents (Anita), said: “It went extremely well – it absolutely exceeded our expectations and we had a  large number of MLAs (members of the legislative assembly).

“We definitely got our message across. I feel positive about the day, extremely positive. We have been really pleased with the day and how it was organised.”

Questions for the prime minister

3.20pm: Travel Weekly’s Ben Ireland poses a question to Boris Johnson – then the industry makes its voice clear as the PM leaves the Palace of Westminster…

Dear ⁦@BorisJohnson⁩ … at least 25 MPs have so far signed the letter calling for support of the travel industry. #traveldayofaction#speakupfortravel They’re listening to the industry, are you? pic.twitter.com/UgGkD3Kc5T

That’s a car with the prime minister @BorisJohnson in it. He’s quite literally just turned his back on the travel industry at College Green. #TravelDayOfAction#speakupfortravel Let’s hope he noticed the lobby pic.twitter.com/w43C3YRcHM

3.15pm: Shadow tourism minister Alex Sobel has explained his backing for the Travel Day of Action in a post on Twitter.

I am supporting the #TravelDayOfAction.

I have been around the country engaging the tourism industry

Like many in the industry I was disappointed to see a lack of sector specific support in the Tourism Recovery Plan and no extension of measures when reopening was postponed pic.twitter.com/Vcr4lC9JiS

3.00pm: Conservative MP and chair of the transport select committee joined trade leaders and cabin crew to show his support for the Day of Action. If you haven’t seen it yet, you can watch Merriman’s interview with Travel Weekly by clicking here. 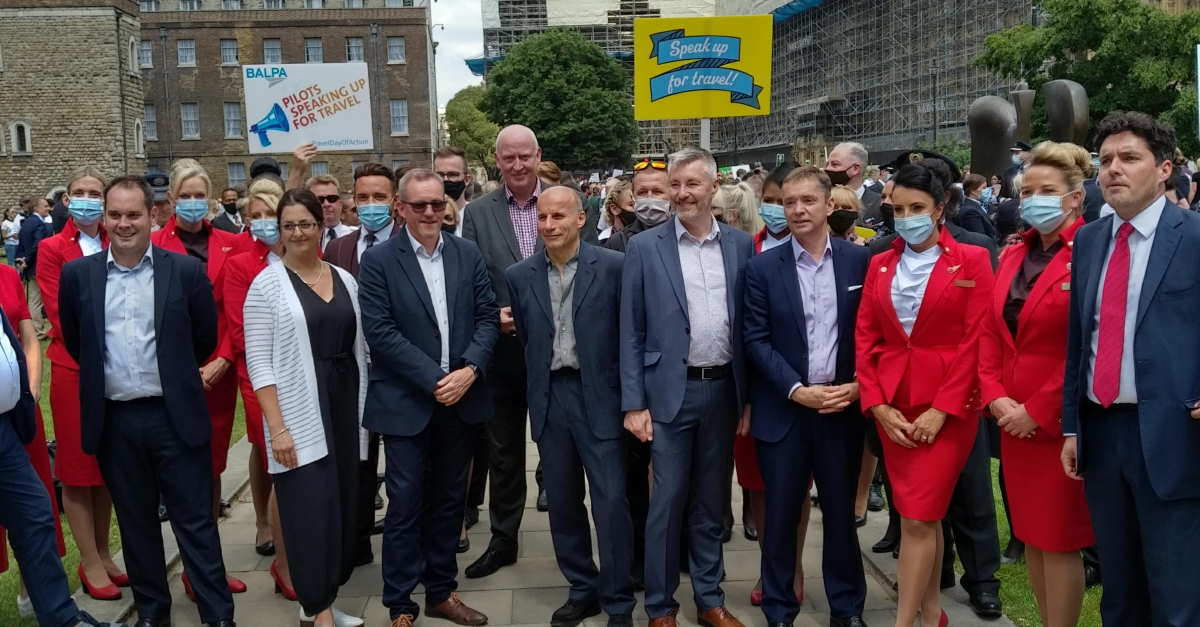 Tui and Virgin Atlantic send crew to back efforts

Let’s build on the great progress of the vaccination rollout and safely open up travel this summer @borisjohnson. Jobs and livelihoods depend on it. People are desperate to see friends/family overseas, make business connections & have a break #speakupfortravel#traveldayofactionpic.twitter.com/fHgDXhC1eZ 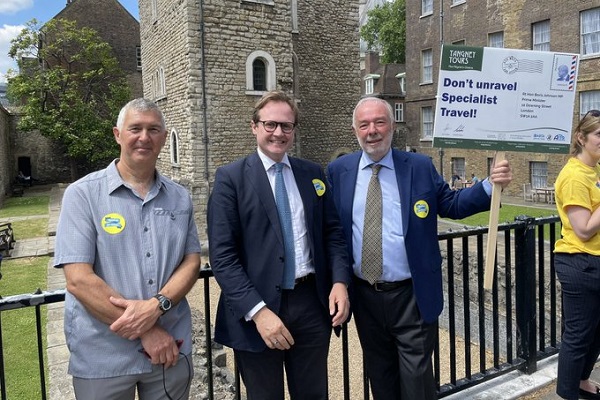 2.50pm: The chair of the foreign affairs select committee insists the government is making its decisions on international travel based on the science and not punishing individual industries.

Speaking to Travel Weekly, he said: “Most people [MPs] realise that this is a hugely important industry both in itself but also as an enabler of so many others.

“We all know that the same plane that carries holidaymakers carries business people and cargo – and if we take away one of these elements it adds to the cost of others.”

2.34pm: Peter Liney, chief executive of Great Rail Journeys, has written an open letter in support of the Travel Day of Action.

He said: “The UK travel and tourism sectors remain essentially closed, mired in uncertainty and deeply concerned for our future. The UK is falling behind other nations in its travel restart plans and risks becoming an outlier, undermining our Global Britain aspirations.

“The health secretary has said that we cannot expect a return to international travel in the ‘medium term’ because of the need to protect domestic freedoms ‘at all costs’.  Those costs will be disproportionately met by those employed in the travel and tourism sectors, who feel increasingly abandoned.

“Without a meaningful summer season – a crucial period of the year for our businesses – many thousands of livelihoods are at stake, as well as the ability of our sector to recover and reconnect the UK to the world.”

2.27pm: The SPAA coordinated a lobby at Holyrood today alongside those happening at Westminster and in Belfast. Former president Alan Glen explains why the Day of Action is so essential.

2.26pm: Managing director Tristan Symondson said: ‘As a business we are in support of the proposed action which is fighting for both an expansion of the green list to allow more travel, and targeted sector support in light of the impossibility of operating for much of the last 14 months.

“I have written to our local MP on behalf of the business and although coronavirus has affected almost every business, I do agree that as an industry travel has been hit harder than most.

“We ask that the government listen to these important demands.”

Aviation ‘central to future growth’ in build back from pandemic

EasyJet gearing up for busiest weekend of year