A snap poll of more than 5,000 UK adults has found that more than four in ten Brits ‘definitely would not’ go on holiday to a destination that moved from the government’s green list to amber.

YouGov’s poll, conducted on Friday after the government’s decision to move Portugal from green to amber, found that 43% of respondents would not continue with their booked holiday plans. 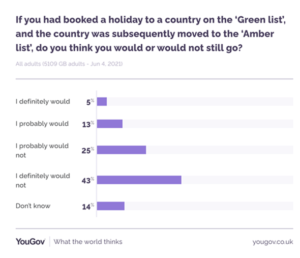 That means that more than two thirds of people either definitely would not or probably would not go ahead with travel plans to countries moving from green to amber.

Broken down by age, the data showed that over-65 were even more unlikely to holiday to amber list destinations, with 61% saying they definitely would not and 20% probably would not, compared to 3% who definitely would, 7% who would and 10% who don’t know.

Younger respondents were more likely to go ahead but were still less likely to go than go to a destination moving from green to amber.

The data was also broken down by region, showing those based in London were slightly less cautious than in the rest of the UK.