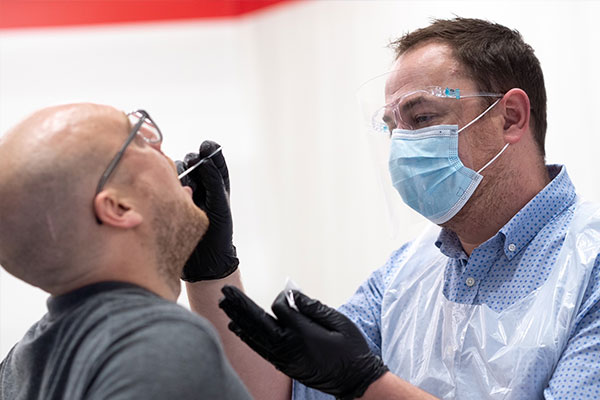 The government will require all international arrivals, including UK citizens, to have proof of a negative, pre-departure Covid test from next week.

Aviation leaders have broadly welcomed the move but insist it must be an emergency measure only, arguing the roll-out of vaccines should trigger the removal of quarantine.

Inbound passengers arriving by boat, flight or train will have to take a test up to than 72 hours before departing the country they are in from next week. The aim is to help protect against the new strains of coronavirus such as those seen in Denmark and South Africa.

The “decisive” government action is in response to changes seen in the transmission of the virus both domestically and across the globe.

“Pre-departure testing will protect travel and will provide an additional layer of safety from imported cases of coronavirus on top of the mandatory 10 day self-isolation for arrivals, helping identify people who may currently be infectious and preventing them from travelling to England,” the Department for Transport said.

“A negative pre-departure test reduces the risk of someone travelling whilst infectious, acting as another safeguard to prevent imported infections.”

Passengers arriving from countries not on the government’s travel corridor list must self-isolate for 10 days regardless of their pre-departure test result “to provide further robust protection from those travelling from high-risk countries”.

Prior to departure passengers will need to present proof of a negative Covid test result to carriers, as well as their passenger locator form.

The UK Border Force will conduct spot checks on arrival into England to ensure that passengers are fully compliant.

The move further bolsters existing protective measures which helped to safely enable international travel last year, with self-isolation for new arrivals and travel corridors remaining “critical” in reducing the risk of imported cases from high-risk countries, according to the DoT.

Shapps said: “We already have significant measures in place to prevent imported cases of Covid-19, but with new strains of the virus developing internationally we must take further precautions.

“Taken together with the existing mandatory self-isolation period for passengers returning from high-risk countries, pre-departure tests will provide a further line of defence – helping us control the virus as we roll out the vaccine at pace over the coming weeks.”

Permitted travellers will need to take their test up to 72 hours before departure, and this will apply irrespective of whether a country is on the travel corridor list.

The government will set out the standards that these tests will need to meet and what proof passengers will need to present, according to the DoT.

Passengers arriving into England who have successfully demonstrated a negative result prior to departure from a country not on the travel corridor list will still have the option to reduce the self-isolation period from 10 to as little as 5 days by paying for a test through the test to release scheme.

This requires a test to be taken on or after the fifth full day since leaving a country not on the travel corridor list.

Passengers will be required to show their negative test result before boarding, and operators will deny boarding if necessary.

On arrival back into the UK, Border Force will check passengers’ test results through the current spot check regime to ensure they are compliant with the new rules, and passengers will be subject to an immediate fine of £500.

A limited number of exemptions includes for hauliers, children under 11, crews and for those who travelling from countries without the infrastructure available to deliver the tests.

Further exemptions will be set out on GOV.UK, the DoT added.

National lockdown restrictions which came into force on January 6 mean everyone must stay at home unless travelling for a “very limited” set of reasons, including for work.

The new measures follow a move to temporarily suspend direct travel from South Africa to England after new evidence emerged from health authorities reporting an outbreak of a variant strain of coronavirus spreading to some local communities.

Those who travel indirectly from South Africa must self-isolate for 10 days.

Airlines UK chief executive Tim Alderslade, said in response: “We recognise the UK government’s need to act now and support the introduction of pre-departure testing in order to keep the country safe and borders open.

“However, this should be a short-term, emergency measure only and once the roll-out of the vaccine accelerates, the focus must be on returning travel to normal as quickly as possible in order to support the UK’s economic recovery.

“This includes removing the need to quarantine or test as the UK population is vaccinated and the virus is brought under control at home and abroad.

The Board of Airline Representatives in the UK (BAR UK) broadly welcomed the transport secretary’s announcement providing these emergency measures are only imposed for the short term.

Chief executive Dale Keller said: “Airlines have widely supported the introduction of pre-departure testing for many months and we recognise that the public will welcome this critical measure at the current time.

“However, it is vital that the lockdown period is utilised to develop a well-coordinated path towards easing travel restrictions at the earliest opportunity once the threat recedes, in particular the requirement to self-isolate for 10 days after arrival in the UK, and to review the test to release option after five days.

“As the vaccination programme gathers pace and the most vulnerable are protected, it is vital that international travel is normalised through removing layered or conflicting measures that do not achieve the necessary balance to protect public health, restore confidence and rebuild the aviation and travel sector.”

Airport Operators Association chief executive Karen Dee said: “The introduction of pre-departure tests is understandable from a public health perspective but the government has missed an opportunity to further reduce quarantine under the test to release scheme in England.

“Travel bans introduced before Christmas and the lockdown measures introduced this week mean UK aviation is, once again, effectively closed. This has made devastating situation for UK airports and communities relying on aviation worse.

“Aviation will only fully recover when the need for quarantine is eliminated on a four-nation basis across the UK. Testing, including pre-departure tests, has a crucial role to play in that.

“We urge the government to work with industry and public health authorities to take further steps on pre-departure and rapid testing as soon as possible to safely remove quarantine altogether.

“Until that happens, industry cannot recover fully so government must provide financial support to protect connectivity and its global Britain and levelling-up agendas.”

Travel commentator Paul Charles, chief executive of PR firm the PC Agency, tweeted that it is unacceptable for the DoT “to leave the travel sector in limbo”.

He added: “There are no details on the type of test needed before travelling into the UK or which countries will be exempt due to poor infrastructure.”

UKinbound chief executive Joss Croft said: “Testing pre-arrival is a very positive step forward and something that the industry have been asking for since the summer.

“However, this mechanic alone will fall woefully short when it’s safe to travel again as no one will want to come to the UK if they have to isolate for a minimum of five days.

“Under this new policy, arrivals from non-travel corridor countries still have to quarantine or isolate, an issue that could be eradicated by implementing a second test on arrival.

“For travel to recover we also need a common international standard of testing, and we ask ministers to work towards this. Inbound tourism will be vital to the UK’s economic recovery, but today businesses in this industry are struggling to survive as they continue to be excluded from key support measures.

“The government needs to stop turning a blind eye, act now and actually listen to the inbound tourism industry.”

Gatwick chief executive Stewart Wingate said: “Public health remains of paramount importance and, while necessary, the new national lockdown will have a severe impact on Gatwick airport with air traffic levels likely to fall back dramatically again in coming days. The airport will, however, remain open to facilitate flights for essential travel and cargo supplies.

“When current lockdown restrictions are eased, and infection rates decrease, pre-departure testing could ultimately encourage frequent international travel to restart by eliminating the need for arriving passengers to quarantine. It remains important, however, that any tests are affordable for passengers and that these arrangements are temporary and are withdrawn at the earliest opportunity when public health conditions permit.

“We continue to ask government to announce a comprehensive support package for aviation to help us protect jobs.

“It is vital that critical national infrastructure such as airports are able to thrive and provide the international connectivity required to ensure Britain remains open for trade and business as we enter the post-Brexit era.”

Business Travel Association chief executive Clive Wratten said: “The BTA welcomes the announcement of pre-departure testing for all travellers coming into the UK and the prioritising of public health. We have been campaigning for this since May 2020.

“The testing scheme, travel corridor list and quarantine requirements will need to be kept under close review so that business travellers can contribute fully to the UK economy as international borders open up.

“We look forward to working with the government to develop wider understanding of the breadth of work being undertaken by UK business travellers across the international trade market.”