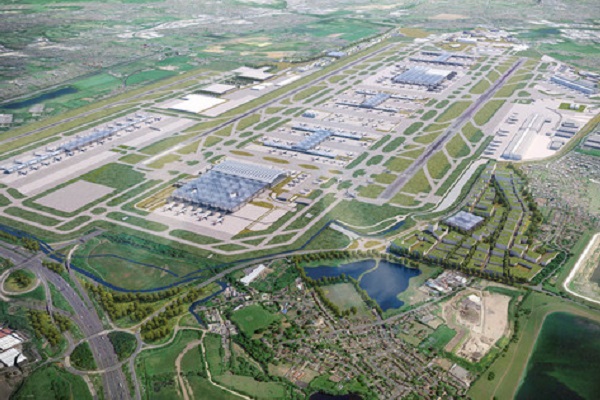 Heathrow will not be able to deliver promised 740,000 flights a year due to safety question marks over its third runway, a new report claims.

The west London hub will be limited to less than 700,000 total annual aircraft movements because the planned runway will only be able to operate at two thirds of the capacity of the existing two runways due to safety constraints.

The claim comes in a report by aviation consultancy Ebeni UK.

The study was commissioned by Heathrow Hub, which has put forward an alternative proposal to extend the existing northern runway.

It claims Heathrow’s north-west runway proposal adds significant operational costs to airlines as a result of aircraft having much longer taxiing distances as well as less efficient approach and departure routes.

The scheme would also lead to more aircraft flying across the capital, affecting at least 60,000 in west London alone.

The airport’s suggested third runway “requires such complex airspace that it will not be able to deliver on its claimed capacity, noise and respite figures,” the independent study suggests.

Jock Lowe, a former British Airways pilot and director of Heathrow Hub, said that the Ebeni review highlights flaws “that make it impossible for it [Heathrow] to deliver on its capacity, noise and respite targets”.

He said: “Failing to ensure a proper safety review has been conducted is, I am afraid, a massive omission by Heathrow and the Department for Transport.

“The sooner the government realises it has made a significant mistake in recommending Heathrow’s expensive, complex scheme the better.”

Lowe, who is due to appear before the Commons transport committee today, added: “Our proposal to extend the northern runway is a superior scheme. It can deliver the increased capacity required in a cheaper, quicker and simpler way. Furthermore, our proposal has passed the necessary safety review and offers more respite from noise.”

Heathrow chief operating officer Derek Provan told The Sunday Times: “We have unrivalled experience of operating a major airport and we are completely confident that we can safely operate 740,000 annual flights with a third runway.

“This was confirmed independently by the Airports Commission after the most extensive, in-depth review of aviation in a generation.”

Heathrow has yet to confirm how it would build the runway over the M25 motorway.

Hotels tycoon Surinder Arora has also put forward rival proposals, and called for the expansion to be taken away from the airport operator. He said allowing his team to deliver and run the third runway would save £6.7 billion.