• The Air Travel Trust Fund warned agents who sold flights with hotels or other travel services without an Atol were acting “unlawfully”.

• Travel Weekly teamed up with Tipto to arrange an agent and operator job swap to find out what life was like on the other side of the fence. Kitts Travel director Hazel Bryant and Wendy Wu Tours business development manager Karen Milward took up the challenge. 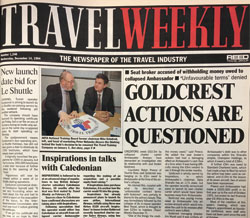 • Creditors owed more than £63 million by collapsed charter carrier Ambassador Airways demanded an investigation into its relationship with seat-broker Goldcrest. Liquidators claimed Goldcrest was hanging on to £3 million owed to Ambassador at the time of the airline’s collapse.

• Tour operator Inspirations was understood to be at an advanced stage of negotiations to buy British Airways’ charter subsidiary Caledonian Airways, 10 months after the deal was first revealed by Travel Weekly.

• Walt Disney Attractions announced it would air its first UK TV ad for Walt Disney World at Christmas to counter “ignorance” about its Florida resort.

• Meanwhile, Aito was urged by its non-Abta members to devise a scheme to protect pipeline cash. 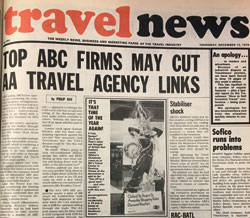 • Some leading ABCharter operators threatened to withdraw their agency agreements with AA Travel Services in protest at the CAA’s controversial decision to go ahead with a two-tier structure in 1975. Under this system, direct-sell operators could sell seats at rates 10% lower than those which sold through the trade.

• Start-up West Country carrier Severn Airways was granted a licence to start flying in March 1975 from Bristol with links to Leeds Bradford and Newquay, and a Bristol-Swansea-Cork service. But its application for a Bristol-Exeter-Dinard route was turned down.

• A dispute with Travelnews’ printers forced the magazine to drop 16 pages from its December 12 edition and postpone several features.