After a torrid two years, agency owner Richard Slater tells Hanisha Sethi about looking ahead and plans for expansion.

It’s been just over three years since Richard Slater opened Henbury Travel, most of the time has been spent navigating through a pandemic while trying to keep customers informed of constant changes to travel restrictions.

Business was finally starting to look positive again at the end of 2021, before Omicron hit. “October and November were strong for bookings and we were also getting bookings for 2022 and 2023,” says Slater, who runs the shop with consultant Charlotte Green, who he has known since they were teenagers. “However, towards the end of November, everything nosedived,” he adds. Now in February, Slater is feeling more upbeat and says repeat business is starting to return.

While business has almost returned to normal for the agency, opening hours have been tweaked as a result of changing consumer habits.

“It appears Monday is the new Saturday,” says Slater. “Now we only open until 1pm on a Saturday and I cover this shift by myself. It seems more people are spending the weekends with family. It’s usually what we call a ‘manic Monday’ and ‘manic Wednesday’ in the office.”

During our conversation, he receives a text from a customer, and jumps on it to sort out the issue. It’s clear that attending to individuals’ needs is an important part of the agency’s offering.

He recalls a similar recent text from a customer who needed assistance with a technical issue at the airport. Slater explains: “We resolved the issue straight away, and they later sent a message to say they had arrived at in Madeira and were now relaxing with a few drinks. It’s great they feel like they can message when needed.”

That particular customer came to the agency with a strict £800 budget, and Slater says they “trusted my judgement on where to go”.

But Macclesfield also has bigger spenders. “We have a few local celebrities in the area,” Slater explains. “It’s always exciting for us to see Noddy Holder from Slade passing by, or former Emmerdale actor Kelvin Fletcher looking at our window displays.” 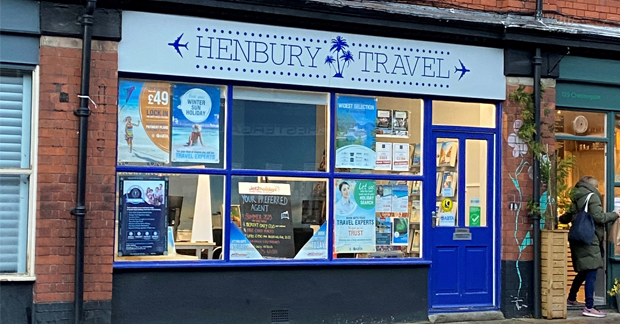 As well as looking out for his own business, Slater takes an interest in the wider travel agent community as Abta’s northwest of England chairman. A recent key issue has been urging local agents to persist with councils on Additional Restrictions Grants.

“We have a good relationship with Cheshire East Council,” he says, noting: “We’ve been lucky enough to get grants and they have been advising us on the type of grants available [but] I’m well aware some agents in the northwest region have not been so lucky.

We have a good relationship with Cheshire East Council, we’ve been lucky enough to get grants and they have been advising us on the type available

“It has been important to contact the mayor of Manchester, Andy Burnham, to raise awareness and encourage him to speak to individual councils to [get them to] hopefully start paying travel agents.”

In this role Slater has become a spokesperson for the trade, with appearances on local consumer media. While we talk, he receives emails from the BBC’s regional team. “It’s important to represent the struggles our industry has faced throughout the pandemic,” he tells me. “Every opportunity to be honest about the situation should be taken, as it will help others in the industry.”

Social media is also important, for bookings as well as profile. Checking the agency’s Facebook page for comments and queries, he says: “I always try and put a spin on any photos, by writing a nice quote, or a lyric.” 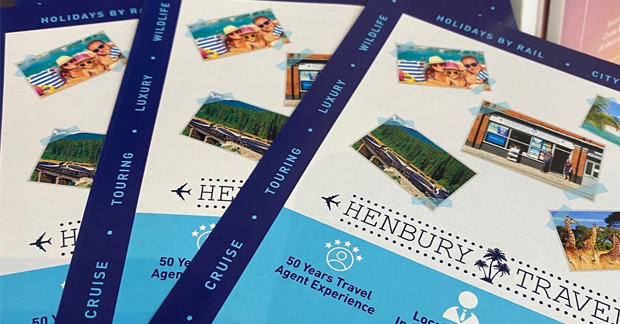 Looking ahead, Slater is aware of shared concerns facing the industry. “There’s worry recruitment is slow at the moment,” he says. “It feels as though a lot of people are cautious about going into the travel industry and that is worrying.”

Henbury Travel is recruiting a third team member and is considering taking on an apprentice. “We’re working with a local college and hopefully they can work with us on customer service, or perhaps marketing.”

With 2022 looking more positive than the last couple of years and signs of a travel rebound starting to appear, Slater reveals he even has plans for expansion.

He won’t tell us the whole story but says: “All will be revealed soon…” 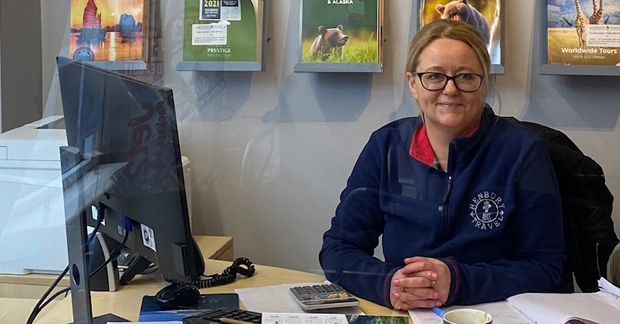 Up close and personal with Charlotte Green, travel consultant

Charlotte and Richard haven’t always worked in the travel industry.

Their history as both friends and colleagues goes beyond Charlotte joining Henbury Travel in November 2019.

“We’ve known each other since we were 14 years old! We used to work together in Richard’s uncle’s chip shop,” says Charlotte. “We’ve come a long way since then!”

Charlotte discovered her passion for travel at college. When she left, she became a holiday rep for Thomson in Majorca in 1996, recalling the moment she realised it was “really hard work”, with long hours, and not just about the partying.

On her return to the UK, Charlotte worked for Thomas Cook before being made redundant when it failed in 2019. “We were asked to use scripted sales techniques at Thomas Cook. At times it felt a little robotic – it was very different to here.”

To be working in an agency again, and an independent business, is a huge relief for Charlotte.  “We’re getting a lot more customers and it’s great to see repeat customers,” she says. “I’ve enjoyed working on tailor-made holidays because you can really get to know the customer on a personal level.” 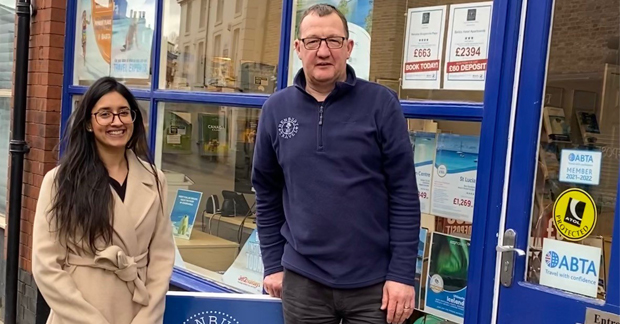 In the hilly Cheshire market town of Macclesfield, Henbury Travel is in the heart of a friendly and neighbourly business community that looks after each other and its locals.

Owner Richard Slater gives me a warm greeting and urges me to pop into the cafe next door and visit the charming Georgian town hall, which is just a short walk away.

His extensive knowledge of the industry is matched by his employee Charlotte, who is equally as charming and friendly.

Richard and Charlotte both explained they had missed the interaction with customers, investigating enquiries together and keeping each other updated

The small yet cosy agency has desk space for three, and plenty of room for customers to browse and pick up brochures.

Henbury Travel’s branding is dotted around the shop, with leaflets placed on each desk for customers to take away with them. I could tell Richard and Charlotte work well as a team. And they both explained they had missed the interaction with customers, investigating enquiries together and keeping each other updated during the dark months of Covid.

The pandemic has been an ongoing battle for all agents, but it’s clear that the Henbury Travel team’s optimism and enthusiasm for travel – and creating enjoyable, yet safe, recommendations – is a passion, and will continue to be so.

Travel industry must ‘fundamentally change to reconnect with natural world’