• Homeworking companies turned to their local communities to replace calls lost by the wind-down of Teletext’s analogue service, officially due to be switched off in September 2010.

• Preston Travel Group pledged to continue investment in the trade after buying Peltours. It said it would make Peltours, Amathus Holidays and Preston Holidays available on viewdata from January 2010.

• Operators feared a “VAT nightmare” under new EU rules coming into force in January 2010 which meant operators buying hotel stock, transport or activities had to register and account for VAT in the country where the product was located.

• Meanwhile, Barrhead Travel revealed plans to expand outside Scotland by offering franchise agreements across the UK. It sought to work with existing agents who wanted to open their own agencies. 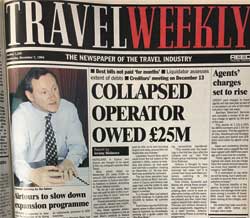 • Hoteliers in Cyprus and Greece were thought to be owed £25 million by collapsed operator Best Travel. It failed on November 29 with 40,000 bookings to Cyprus and 20,000 to Greece for summer 1995. It owed £19 million to 160 hoteliers and apartment owners in Cyprus and £6 million to Greek hoteliers.

• The CAA announced that large operators on the verge of collapse would not be allowed to collapse in peak summer or winter months. It deliberately held off calling Best Travel’s bond for two months until fewer people were abroad to minimise disruption.

• Airtours was expected to slow down the expansion of its Going Places retail chain after acquiring 40-outlet southwest miniple Winston Rees, which brought its network to 605 branches. 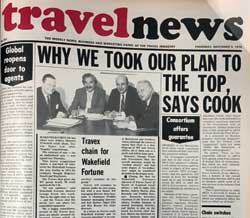 • Delta, the Merseyside-based travel agency consortium, announced its own holiday guarantee scheme for summer 1975 that would refund money to clients in the event of a tour operator collapse. Meanwhile, Thomas Cook and Abta presented different holiday protection scheme suggestions to government, meeting Department of Trade officials separately on the same day.

• Thomas Cook angered some agents with its decision to put together a separate protection scheme to Abta. On the letters page, Adam Dawson, of Davis World Travel, said 20 shops in the Portsmouth area had withdrawn Cook brochures from their racks in protest. “We call on all other retail agents to follow suit,” he wrote.