• Sir Richard Branson unveiled Virgin Galactic’s SpaceShipTwo, offering space flights for £123,000. Due to be up and running by 2011, it was christened VSS Enterprise at Spaceport America in New Mexico in front of an audience including California governor Arnold Schwarzenegger.

• In the story of the week, the industry was given a reprieve in the pre-Budget report although there was a warning bookings could be seriously affected from next summer. No major tax increases were announced but experts said these could follow in the spring.

• A report by the Committee on Climate Change said the fight against climate change need not mean the end to growth in aviation. The report said targets on cutting emissions could be met if demand did not rise by more than 60% by 2050. 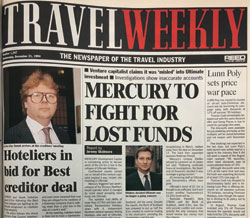 • Lunn Poly moved to counter a post-Christmas discount war by launching its campaign early, with 12% discounts off summer 1995 holidays. Thomas Cook immediately followed with the same offer. Lunn Poly’s move was seen as a signal it did not want a repeat of summer 1994 launch discounts of 15%.

• Meanwhile, Scottish retail chain AT Mays said it would advertise its post-Christmas discount campaign on TV in Wales and the south of England for the first time. Marketing director Roddie MacPhee said consumers would expect discounts of 15%.

• Venture capitalist Mercury Development Capital considered action to recover some of the £4.5 million lost in the collapse of Ultimate Holidays, while Cypriot and Greek hoteliers owed £12 million due to the Best Travel failure fought to be recognised as creditors.

• Inspirations bought Caledonian from British Airways in a £16.6 million deal. 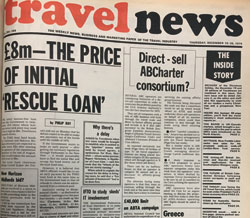 • Travelnews’ top story suggested that the government would need to make £8 million available in an initial interest-free loan to reimburse customers of operators that collapsed in 1974, including Clarksons and Horizon.

• Directors of Horizon Midlands moved to form a consortium to bid for the 58% controlling stake in the company previously held by Court Line.

• Several operators, with a mix of trade and direct-sell business, were said to be considering forming a direct‑sell consortium to overcome problems posed by the CAA’s new two‑tier fare structure for 1975.

• In Europe, a government decree in Spain meant its international airports could set up duty-free shops, while the Greek government prepared to take Olympic Airways under state control after shipping magnate Aristotle Onassis decided to withdraw from managing the airline.