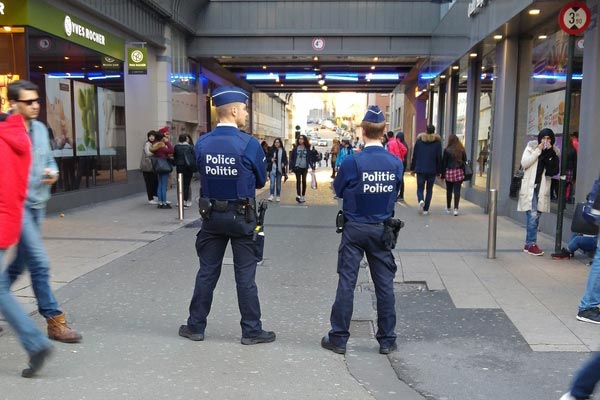 Tight security controls were in place as flights resumed yesterday from Brussels airport.

The partial re-opening came 12 days after an attack by suicide bombers which killed 16 people at Zaventem airport.

Passengers were screened on an approach road and again before check-in.

Tight new security checks were put in place after police threatened to go on strike if measures were not improved.

Passengers were asked to arrive three hours before their flight departure time.

They were only able to get to the airport by car or taxi – the terminal remained closed to trains and buses.

Brussels Airlines has estimated the closure of its hub has been costing it €5 million a day.

The number of flights will gradually increase to the maximum capacity of temporary structures in place – 800 departing passengers per hour.

Airport chief executive, Arnaud Feist, said: “These flights are the first hopeful sign from an airport that is standing up straight after a cowardly attack.

“It is the start of a new beginning, even if the is still so much work to be done to return things to a normal situation, to the extent that it will ever again be normal.”

He said he hoped the airport would get back up to full capacity in time for the start of the summer holidays at the end of June.

Other airlines also plan to resume operations at Brussels airport.

The exact flight schedule for the coming days is being worked on in consultation with airlines.

British Airways flights to Zaventem remain cancelled up until Thursday with flights from Friday under review. In the meantime, the airline is serving Liege as an alternative.

Ryanair services are continuing to use Brussels Charleroi airport instead of Zaventum up until Thursday.

EasyJet flights will continue run to Lille instead of Brussels until at least tomorrow (Tuesday).