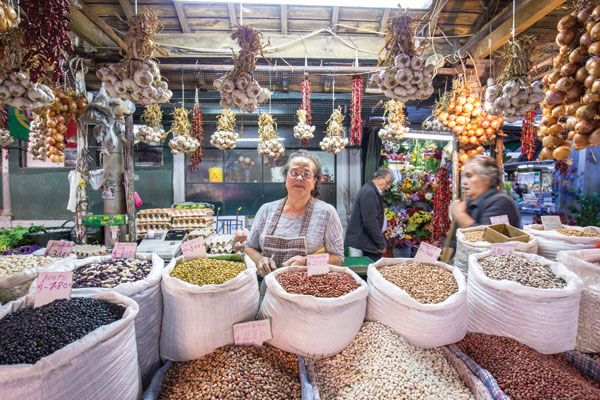 One question keeps running through my mind during the time I spend in Portugal, home to two of history’s most influential explorers, Vasco de Gama and Ferdinand Magellan. Why were they so eager to leave?

Travelling south on Intrepid Travel’s new food tour around Portugal, it’s fair to say the pair leave quite an impression.

Arriving in the former capital of Porto, I discover a city decorated in ornate tiles from top to bottom, with a bustling town centre and impressive hilltop views. And for every example of aesthetic splendour, there’s a restaurant, cafe or grocery store packing a culinary punch.

Historically agricultural and cooler than the south, northern Portugal’s cuisine is known for its hearty plates, distinct from the salted dishes in the south. Our first dish, however, is a national staple. The francesinha is a sandwich filled with sausage, bacon, steak and covered in cheese, so it (literally) isn’t for the faint of heart – perhaps recommend a health check prior to travel for those planning to indulge in too many of these.

From there, we snake through the busy streets of central Porto, sampling everything from bifana (pork steak roll in juicy sauce) at working men’s favourite Conga, to port and smoked meats at Comer e Chorar Por Mais, a grocer’s that has served locals and travellers alike since 1916.

The city is lively enough. Bop cafe is a highlight in the evenings, with its retro vinyl behind the bar and wide selection of beers.

However, in general Porto is a laidback affair, with evening meals more likely to be long and languid – and all the better for it. The slow food at Flor dos Congregados restaurant, in particular, proves worth the wait.

A river runs through it

Wedged between our two nights in Porto is a trip through the Douro Valley, and as we drive through the hills, I notice several English names on vineyard slopes: port manufacturers that have been here for centuries, harking back to the 1703 Methuen Treaty between England and Portugal. One of the oldest trade deals in the world, it made exports cheaper and heralded the development of port, which was first produced as a way of preserving wine on the high seas.

Interesting as the valley is for history buffs, today the region’s scenic beauty (and the produce itself) is the real draw, best enjoyed by driving through the hills or taking a scenic journey along the river.

Like the valley itself, tours offer a unique blend of history and nature, simple food and fine wine.

Lisbon flexes its muscles as soon as we arrive, with resplendent sunshine lighting up the gorgeous Praça do Comércio, a photogenic spot from where sailors departed and, if they were lucky, returned to, at the height of the Portuguese empire. Lisbon is much hillier than Porto, so recommend trams for even the fittest of travellers, though it’s nice to walk where possible, if only to avoid the crowded public transport.

During a fado walking tour, taking its theme from the traditional Portuguese folk music, we visit the increasingly hip but still hard-edged districts of Mouraria and Alfama; their narrow alleys, dive bars and cobbled streets are easily the highlight of the trip.

It’s easy to see why Lisbon is enjoying a long-overdue day in the sun. While the country at large has witnessed a boom in tourism, the capital is leading the charge. Paula Oliveira of Visit Lisbon says: “In the past five years, Lisbon has registered significant growth in tourism numbers. From 2011 to 2016, bed nights in Lisbon metropolitan area’s hotels and similar establishments rose from 9 million to 13.1 million.

“Lisbon is a cosmopolitan city,” she adds. “It’s a city to be experienced out in the open, with its landscapes and views, and a destination where interaction between visitors and hospitable locals happens naturally.”

Her words ring true during our stay in the city: from iconic eatery Pastéis de Belém, where we try pastel de nata, Portugal’s famous custard tarts, in their birthplace, to Mouraria and Alfama, two of Lisbon’s most multicultural (and poorest) districts. They are also a living, breathing example of the hospitality and cosmopolitan charm Oliveira speaks of, from street art celebrating the districts’ fado and multi-ethnic heritage to ginjinha, a liquor made with cherries and served to us by Tony, a local who pours shots of the drink in his shoebox-sized bar.

Home on the range

From plaintive fado music to pleasant farmstays, our trip ends at Herdade Da Amendoeira, a remote farm specialising in organic produce, where you’re more likely to see a wild rabbit than a passing car.

The tour ends in a banquet of meats and cheeses from the Alentejo region, a great sign-off for a trip that has put proper Portuguese produce at the centre of it all. And just like Messrs Magellan and de Gama, I think I will certainly need to make the return trip some time soon.

Do
Encourage clients to try new foods and flavours – even if they decide they don’t like it, at least they can say they’ve given it a go.

Don’t
Forget to tell a tour operator well in advance of any dietary requirements or allergies – these can often be accommodated with enough notice.

Michael Edwards, managing director, Intrepid Travel
“We’ve seen growth across all of western and eastern Europe, and an increase in tourism to the region. While it’s always been a relatively small region for us, we’ve started to put on additional tours, and a food tour is a good way to take advantage of the rising popularity of Portugal.

“There has always been an element of food in our tours, but in the past five years, it’s been a big part of our development. That’s part of a massive trend, but we’ve also led the way with our Real Food Adventures. It’s one of our fastest-growing products, and there’s still a long way to go.”

Intrepid Travel’s eight-day Portugal Real Food Adventure, featuring Galicia, features a tour of a fish market and cooking class in Vigo, tasting tour in Porto, Douro Valley day trip, a meal on a farm in the Alentejo, and a day trip to Evora.

Departures run from May to October 2018, with land-only prices starting at £1,660, including seven meals, transport (by train, private vehicle, bus and ferry), six nights’ hotel accommodation and a night in a farmstay, and a welcome dinner in Santiago de Compostela.
intrepidtravel.com/uk

Urban Adventures’ Experience Porto’s Bites and Sights is a four-hour city tour starting with coffee and pastel de nata, tasting local dishes including francesinha en route, and ending with a glass
of port wine.
From £48.
urbanadventures.com