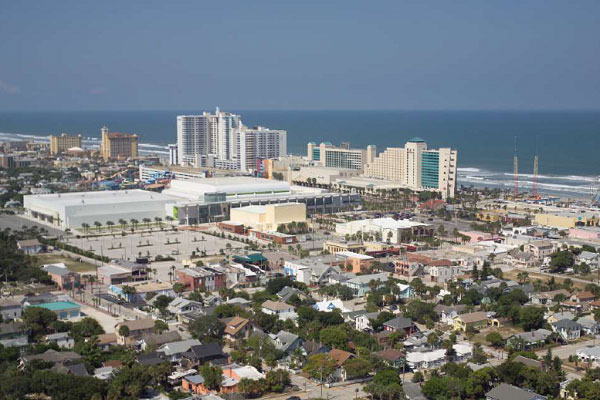 Daytona Beach is calling on the UK travel trade to help garner enough demand so that it can re-open the international terminal at its airport, which has been closed for 15 years.

The destination, on the east coast of America, hopes that its new One Daytona shopping and entertainment complex will bolster its tourism offering and add to its traditional draws – its world-renowned beach and speedway track.

There will be two new hotels as part of the One Daytona development, and a much-anticipated Hard Rock Hotel will be opening on the beachfront with 200 rooms in time for 2018.

Daytona Beach, which is around an hour’s drive from Orlando and attracts around 9.8 million visitors per year, currently relies on domestic flights into its airport with international passengers likely to change at either Charlotte, New York or Atlanta.

“We love all our friends in Florida, but we want them, and you, to look to the east, and choose Daytona Beach.”

McMahon said Daytona International Speedway had been ‘re-imagined’ in recent years, and has branched out from its traditional Nascar offering.

She called for UK travel agents to think of Daytona as part of a twin centre stay alongside Orlando, pointing out that it is the closest beach to the theme park hub.

The destination is trying to lengthen the average stay of its visitors, and McMahon said the family offering from One Daytona was part of that strategy.

“It’s added a different dimension,” she said. “We are breaking through that idea of Daytona Beach being a Spring Break destination. We are much more than that.”

Alfredo Gonzalez, vice president of sales and global development at Visit Florida, said the addition of Hard Rock Hotel and One Daytona to Daytona Beach is “changing the landscape” of the destination.

He added: “That international terminal has been closed for 15 years. We are going to open that terminal again, but we need your help to do that. Tell your clients about what Daytona Beach has to offer.”

Speaking to Travel Weekly, Gonzalez added: “We are not far off [with the terminal]. We have the slots, we have the great beach and now we have the modern hotels – it’s just a matter of time before the demand follows.”

McMahon added: “As we continue to grow and evolve, we thank you for your partnership.”