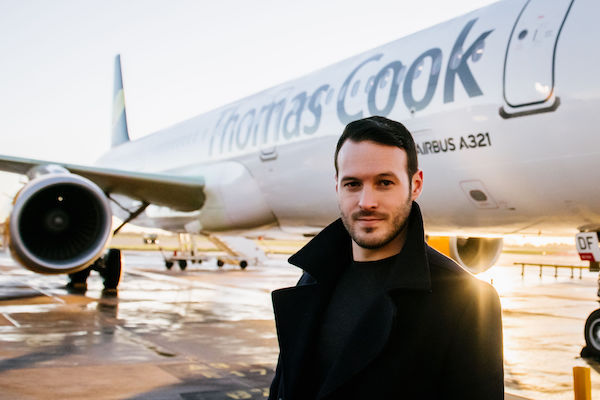 Thomas Cook Airlines has worked with a hypnotist to help frequent flyers to re-live the excitement and sensations of their first flights.

The experiment with TV hypnotist Aaron Calvert (pictured) followed research by the holiday airline which showed how flying has become mundane for many travellers.

The airline’s survey of 2,000 people found that more than a third (35%) have fallen out of love with air travel and more than half (55%) feel that flying is a means to an end.

However, one in five (17%) said their first flight was one of their top-10 life experiences and 28% said they wish they could experience the ‘first flight feeling’ again.

Under hypnosis, each person was told they were being filmed for a documentary about being a first-time flyer before being taken through the airport and onto the plane – where they believed they were boarding an A321 for the first time.

The participants spent eight hours under hypnosis and experienced every element of air travel as if it were for the first time, including boarding, take-off and landing.

Calvert said: “What’s amazing is the simplest things are bringing such joy. They looked out of a window, saw a plane and couldn’t believe the size of it or that it could actually take off.”

One of the hypnotised passengers, James Jebson, is a 36-year-old photographer from Blackpool.

He said: “It’s made me realise how incredible flying is. It’s the most strange, bizarre and beautiful experience.”

The research also found that New Zealand (24%), Australia (21%) and Japan (15%) were the top countries that people want to visit and experience for the first time.

However, 5.9 million Brits are still yet to fly for the first time, according to the Office for National Statistics.

Maggie Kennedy, director of group cabin crew management at Thomas Cook Airlines, said: “We think that your holiday should start as you arrive at the airport and board the aircraft, which is why we want to show the fun of flying through this experiment.”