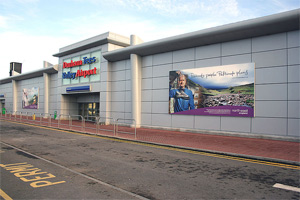 A regional airport has started charging passengers to enter the departure lounge. Fees of £6 for adults and £2 for children aged three to 15 years have been imposed at Durham Tees Valley airport.

The ‘Passenger Facility Fee’ was imposed from Monday. Majority shareholder Peel Airports said the fees for all departing passengers were needed to “help support the continued expansion of the airport and to secure its future”.

Peel took Durham Tees Valley over as a strategic partner in 2003 and the airport handles almost 700,000 passengers a year. The company also runs Robin Hood Airport, Doncaster Sheffield and Liverpool John Lennon airport, and has plans to develop a city airport in Manchester

Peel Airports’ chief executive Craig Richmond said: “No one likes being asked to pay money but I hope that customers, and indeed the whole community, will recognise that it is something we have to do.

“I have been greatly impressed by the sense of support and pride which local people feel in Durham Tees Valley – now more than ever is the time for people to maintain that support.”

Blackpool airport already charges departing adults over 16 a £10 ‘airport development fee’. Norwich airport started imposing a fee in 2007. It now stands at £5 per adult and £1 for children aged between two and 15.