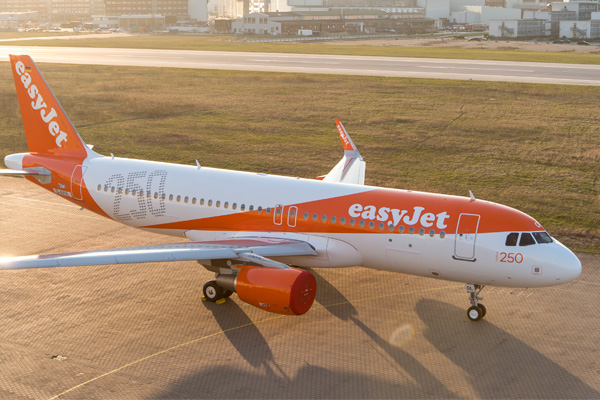 EasyJet today confirmed a 28% slump in annual profits in the face of “significant challenges” and the impact of the post-Brexit slump in the value of sterling.

The total impact of external issues such as terrorism and the shutdown of Sharm el Sheikh airport, flight disruption and the devaluation of the pound was estimated to total £150 million.

Pre-tax profits for the year to September 30 dropped to £495 million from £686 million the previous year despite the budget airline’s passenger carryings rising by 6.6% or 4.5 million to a record 73.1 million.

The airline was buffeted by a series of headwinds, including increased market capacity and aggressive pricing spurred by low fuel prices.

Higher holiday costs for UK travellers following the EU referendum vote and the subsequent weakening of the pound also hit the airline.

EasyJet also suffered from “severe disruption” during the year due to strikes, severe weather and airport issues, which resulted in 8,349 flights being either cancelled, delayed over three hours or diverted, up from 6,789 in the previous 12 months.

A detailed organisational review is also planned, with further information to be divulged over the next 12 months.

“We expect this to result in a simpler, more efficient organisation and will deliver meaningful annualised savings once implemented,” the airline said.

EasyJet pledged to continue “investing substantially” in its digital capability.

The introduction of a new commercial platform is underway with live new homepages featuring an “innovative” flight search and low-fare finder tool. This is expected to be completed by the spring.

“The primary objective is to give us significantly better flexibility and capability, specifically improving our ability to offer customers bespoke, attractive options,” the carrier said.

The combination of increasingly insightful customer knowledge and our digital programme offers increasing amounts of personalisation, tailoring booking journeys based on previous behaviour.

“This is expected to drive higher footfall and conversion rates, as well as higher attachment rates for a wider range of range of ancillary partners.

“It will also enable greater self-management capability through the entire journey chain, from booking to check-in, through the airport and in the event of disruption.”

However, the airline said that it is also focused on providing a bespoke business offering through distribution platforms, Travel Management Companies and direct to small and medium-sized enterprises.

“Growth in GDS volume continued to drive revenue and channel movement from web bookings to GDS within the Travel Management Company partners.”

Reviewing the past year, chief executive Carolyn McCall said: “EasyJet achieved a resilient performance in 2016, in the face of significant challenges including a series of external events and foreign exchange headwinds.

“Over the last year we have carried a record 73 million passengers who have enjoyed a third successive year of falling fares.

“This great value combined with our friendly service on Europe’s leading network means that passenger loyalty continues to grow with 54 million of them flying with us again in 2016 – 21 million more than five years ago.”

She added: “The team has worked diligently throughout the year to drive out cost and secure our strong number one positions through disciplined growth.

“This has enabled easyJet to deliver almost half a billion of profit and an attractive dividend in line with our 50% pay out policy.

“Looking ahead, the easyJet model remains strong as does the demand environment and we continue to see opportunities in the medium term to grow revenue, profit and shareholder returns.

“In a tougher operating environment strong airlines like easyJet will get stronger and we will build on our already well-established network.

“Almost half of our growth next year will be in the UK, with significant growth also in Switzerland, France and Italy.

“Our strategy of strengthening our positions at our key airports will see double digit growth in key bases in London, Manchester, Venice, Berlin and Amsterdam.”

Joshua Raymond, market analyst at City broker XTB.com, said: “This is a fairly resilient performance from easyJet who have clearly maintained a tight grip on number of flights and capacity in the face of external events such as terrorism that has had a major impact on its network.

“These unprecedented events are predicted to have cost the firm £150 million in lost profits whilst foreign exchange moves has also cost seen a negative impact of £88 million.

“The firm also expects a further £70 million headwind to its first half year performance for 2017 thanks to the weaker pound.

“This is why the firm must continue to focus on its lean strategy, maintaining a tight grip on costs per seat, swelling its load capacity and a bit of luck in the unprecedented events such as terrorism or major flight disruption, if is to return to significant profit growth.”