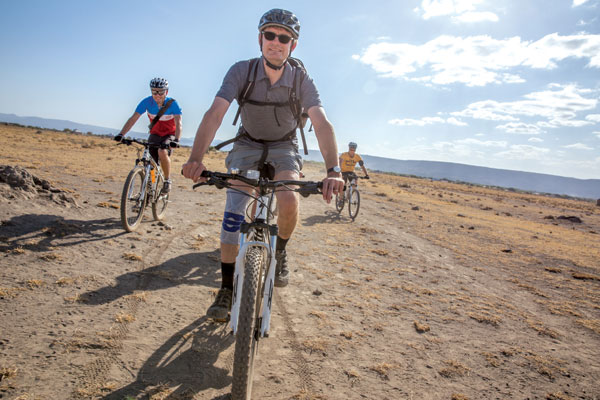 Cycling and a safari? Tamara Hinson does both in northern Tanzania.

As a keen cyclist, I pedal 20 miles along a nearby canal every day, but at 1,500 metres above sea level, the smallest inclines have me wheezing for breath. I develop huge respect for locals, who whizz up hills on rusting bicycles, powered by seemingly invisible forces.

I’ve signed up for Intrepid Travel’s new 13-day Cycle Tanzania, the first organised ride through this part of the East African country. The starting point is the city of Arusha, and from here the route winds through Arusha National Park, before passing through the Ngorongoro District (home of the Ngorongoro Conservation Area), Tanzania’s Rift Valley and Lake Manyara. 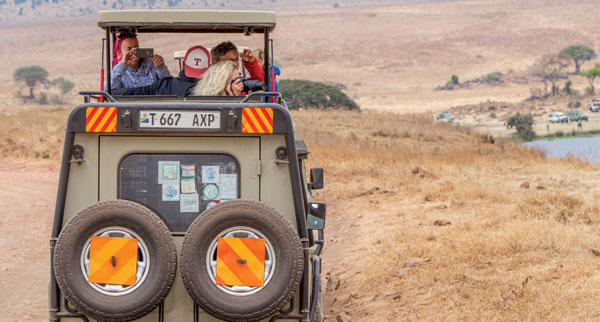 Tanzania is lusher and wilder than many safari destinations, with fewer decadently luxurious camps and a bigger focus on accommodation and activities that benefit locals and have minimal environmental impact.

Tanzania also attracts active travellers, with ascents of Mount Kilimanjaro and Mount Meru the most popular boxes to tick. It’s perfect for those who aren’t afraid to venture off the beaten path, or bed down in a campsite where the morning alarm call is the screech of a hyena. And that comes with a lot of plus points.

At the Panorama Camp we eat breakfast while baboons play nearby. And at Mkuru Training Camp, where accommodation options include tents and dormitories, we learn how the camp doubles as a training centre for both locals and tourists, who can sign up for courses in everything from photography to jewellery making. Profits go to various good causes, including scholarships for local children.

Intrepid Travel supports not-for-profit organisations in several of its destinations, including the International Mountain Explorers Connection, which works to improve conditions for porters. It’s this passion for the destination and the respect for locals that allow visitors to gain such a fantastic insight into the heart of this African gem. And when you’re on a bike, those experiences seem less sanitised.

Several operators offer ‘cultural experiences’, but the formula is depressingly similar whether you’re in Togo or Trinidad. You arrive just as the locals happen to be holding their weekly hoedown, be it a wedding or an elder’s birthday. You snap some photos, do some dad‑dancing, purchase some jewellery and depart. But when you’re cycling, more authentic experiences become easily accessible.

We arrive at the flamingo-fringed Lake Manyara via a winding forest trail, admiring foliage-nibbling giraffes en route. A local fisherman shows us the enormous tilapia he’s caught, before giving us some fish to throw to a gaggle of nearby storks, which leap in the air and batter their rivals out of the way with their huge wings.

In the distance, jeeps bounce along a road, roofs extended to reveal occupants clad in spotless safari uniforms, binoculars raised to squinting eyes. To them, the storks we’ve just fed are mere dots on the horizon. 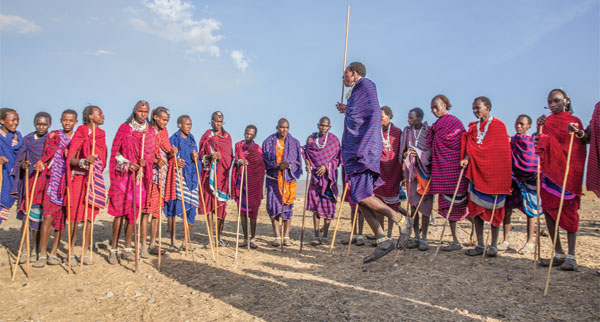 Later, we meet a local Maasai who hops on his bike and leads us down a dusty track to his village. We’re the only visitors, and the local men are keen to show off their traditional jumping skills, leaping skywards while the women whoop and dance. I join the throng, hoping I’m simply witnessing some Maasai matchmaking rather than inadvertently being married off to a local.

Afterwards, the Maasai lead us down onto the plains and invite us to show off our (non-existent) cattle-herding skills. We manage to corral the cows into their enclosure, before chaos ensues and the animals disperse. A baby goat suffers an identity crisis and dashes into the cattle pen, and his young owner dives into the enclosure, crawling under cows’ bellies before emerging from the dust clasping the tiny animal.

More than anything, cycling breaks down barriers. During our daily bike rides, kids dance in the dust by the roadside, sticking out scrawny arms in the hope of high-fives. On more than one occasion, a local joins our clan for a short stretch and we tackle the hills together, us on our shiny bikes and in bright Lycra, them in colourful shawls and worn rubber sandals.

We’ve got two support vehicles – one to carry bikes and another for us to travel in when we’re not cycling. When meals aren’t provided by staff at our accommodation – which includes lodges, campsites and hotels – our travelling team of cooks whips up delicious, energy-sustaining feasts. Hygiene standards are high: when we eat on the road, water-filled bowls are laid out so we can wash our hands. More than once I’m quizzed by a cook who’s not convinced I’ve washed my hands with the required thoroughness.

Although there are some short stretches when we travel on the bus, we rely mostly on pedal power, cycling to new accommodation every night, after days filled with stop-offs that simply aren’t accessible when transport has four wheels rather than two. And it’s a format which suits Tanzania perfectly.

The highlight is the Ngorongoro Conservation Area, a sprawling Unesco World Heritage Site covering more than 3,000 square miles. We ditch our bikes today, and clamber into jeeps before sunrise, entering the reserve under a cloud of fog. It’s only minutes before we spy three giraffes, their long necks forming beautiful silhouettes through the mist. 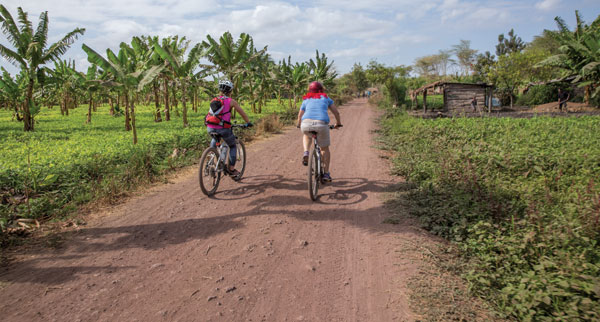 We drive down into the crater and spot a beady-eyed hyena. They’re impossibly ugly, with hunchbacked gaits. We admire a line of wildebeest, snaking along under a lioness’s gaze, before eating lunch by a hippo-filled watering hole, keeping watchful eyes on the creatures, which sink beneath the murky depths like muddy submarines.

A cycle ride through Tanzania left me with memories of encounters I’d never have had if I’d experienced them from the confines of a jeep. Now that’s true pedal power.

Book it: Intrepid Travel’s Cycle Tanzania 13-day tour costs £1,950, including six nights’ camping, three nights in hotels and three nights in guesthouses, and almost all meals. Flights not included. The next available departure is July 9.

“Travellers are always looking for a different way of experiencing a destination and cycling is becoming the chosen medium. The main attraction is the interaction with locals. When you’re cycling, you become part of the environment rather than merely passing through it.”

“Interest in Africa cycling holidays is definitely growing. Before booking any cycling holiday, read the trip notes to see how the cycling is graded. Check the average temperature at the time of year you’re visiting too.”

“People considering this type of holiday should think about what wildlife they want to see. They should specifically research the likelihood of viewing animals from the saddle.”