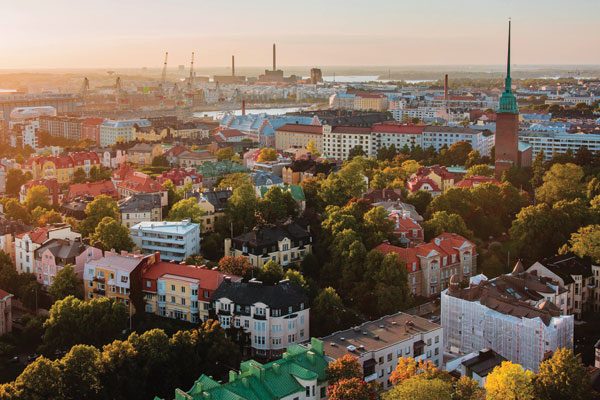 Ben Ireland finds out why Finland’s capital is the next big stopover spot.

Finns are a practical bunch. In Helsinki, they have a saying: “For the French, their nationality is embodied in a bottle of wine; for the Finns, it’s a pair of Fiskars scissors.” You know the ones: stylish, long-lasting orange-handled snippers nestled away in many a British cupboard.

The company is one of a host of Finnish design icons they’re shouting about in 2017, the 100th year of the country’s independence from Russia, and Helsinki’s rapidly-growing design district is like a cross between Shoreditch and a giant Ikea.

The charming capital is also in the midst of a foodie revolution, with 200 restaurants having opened in the past year. With its airport (which will be able to accommodate 20 million international passengers a year by 2020) just a 30-minute drive from the city, plus a growing route network from national carrier Finnair, the capital is selling itself as a stopover destination. So what should visitors get up to when they’re there? 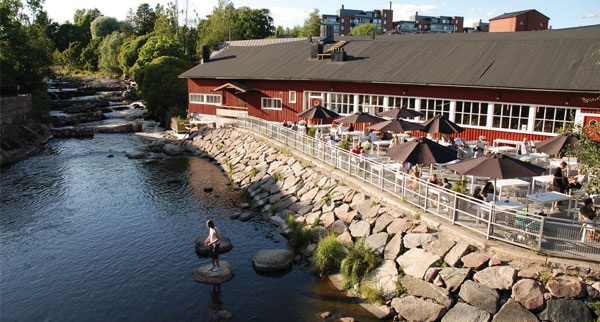 09.30: Start the day with a stroll among the birch trees at Vanhankaupunginlahti. The 258-hectare nature reserve is believed to be the founding place of Helsinki, which was a town of just 8,000 people before the Russians made it the capital of Tsar-controlled Finland in 1812.

You’ll need decent shoes, but wooden footpaths keep you above the water level and make it  accessible for wheelchairs. There have been more than 100 species of bird spotted here, including national bird the whooper swan. Dozens of traditional Finnish wooden houses are based within the park, and residents have to cart their goods via wheelbarrow, so look out for the wheelbarrow parking area.

The reserve epitomises the Finns’ affection for nature – 70% of the country is covered by forest and the land is free for all to forage for food – and is easily accessible by a 15-minute taxi from the Market Square or catching the number six tram (€8 for a daily ticket). Between April and October, you can hire bikes within the city, which can be parked outside the reserve. 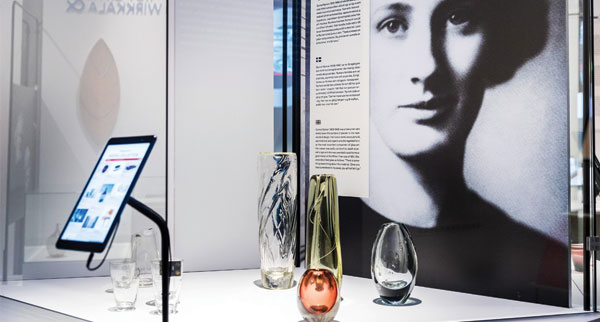 10:30: Head to Helsinki design centre. Fiskars scissors are perhaps the best-known product to hail from Finland, but the country has a rich heritage of building stylish, chic and practical products. On your way back to the city centre, stop at the Iittala & Arabia Design Centre – owned by Fiskars – to check out Finland’s ceramic and glass-design history.

These designs were key to boosting the Finnish economy after the Second World War, and 70 glassblowers still work on site. For €4, you can visit the ninth-floor museum (closed on Mondays) and see glassware from throughout the years. If they’re not too busy, you may be able to have a chat with one of the nine ceramic artists who work there.

The Aalto glass vase, first designed in 1936, remains a classic. Splash out on one of the many sizes available if you’ve got a few hundred euros to spare.
designcentrehelsinki.com

12.00: Across the road, the Mifuko centre sells and exhibits free trade products designed in Finland and made in Kenya. Expect woven plastic baskets, hand-crafted wooden animals and other small trinkets. It’s in an old house that once belonged to workers from the Fiskars factory.
mifuko.fi 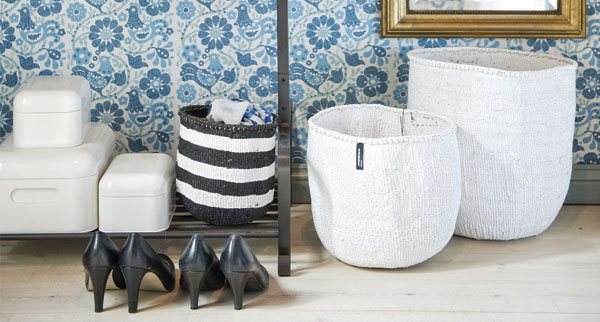 12:30: Pause for lunch at Senate Square. Housed inside one of the oldest buildings in Helsinki, which dates back to about 1750, Restaurant Sunn offers affordable and pleasant dining with a view overlooking the neo-classical architecture of Senate Square. A hearty soup of the day sets you back €10, while the daily special – think pork schnitzel or spicy chicken salad – costs €13.50.
ravintolasunn.fi

Alternatively, downstairs in the same building is Café Engel, named after the German architect behind the square, which is popular with locals as a coffee shop. Pop in for a quick caffeine hit to kick-start your afternoon, or make the most of its relaxed lunch menu, which includes beetroot burgers and meatballs for about €14.
cafeengel.fi/en

14.00: Take a walking tour to soak up Finland’s fascinating history from Swedish rule, through the Russian period and up to independence and the Second World War. Starting at the statue of Russian emperor Tsar Alexander II, revered by Finns for giving the country autonomy, cast your eye across the stone-clad square and admire the Lutheran Cathedral that dominates the skyline. If there are no weddings, you can pop inside and see a statue of Mikael Agricola – who translated the New Testament into Finnish – before making your way past the Finnish Bank and a statue of another national hero, Snellman, who convinced the Russians to allow Finland to have its own newspapers and currency.

Carry on to Long Bridge, which separates the historically aristocratic city centre from the once-industrial, but now bohemian, Kallio district. Crossing over, you’ll notice a tangible difference in vibe. Many Helsinki buildings have been renovated ahead of this anniversary year, including the presidential palace, parliament house and library.

Finish at the Esplanade by the statue of Johan Ludvig Runeberg. Guides at Green Cap Tours offer historical walks or can tailor-make tours, via other locations,
if requested in advance.
greencaptours.com

17.00: It’s time for that other Finnish institution, the sauna. There are tens of thousands of saunas in Helsinki – across Finland, there are as many as three million, which is said to be enough to accommodate every one of Finland’s 5.4 million people, with room to spare – so you’re not short of options. There’s even a sauna in a branch of Burger King.

Go to Löyly (pronounced ‘Lur-lu’) for an authentic sauna experience, though you don’t have to get fully naked. There’s a smoke room and traditional sauna, as well as access to the Baltic Sea to cool you down between sweats. Order a classic Finnish Long Drink, made up of gin and grapefruit, for a refreshing touch. Book in advance.
loylyhelsinki.fi 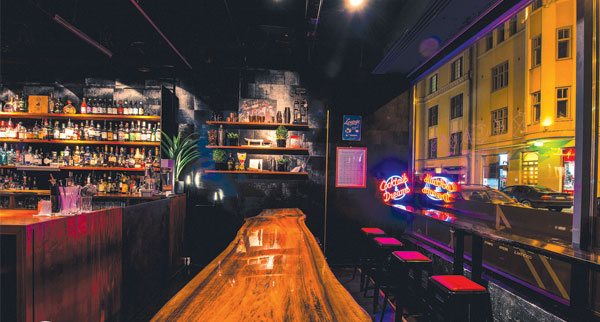 19.00: Feeling refreshed, head for dinner at Grön, where Helsinki’s chef of the year for 2016 serves up a sumptuous four-course tasting menu with all the deft touches you’d expect. For €49 a head, treat yourself to dishes such as raw dry-aged beef with kale, mustard and smoked bone marrow, charred Jerusalem artichokes with silver onions, wild garlic and vendace roe; and a sumptuous apple granita with white chocolate, sorrel and caramel with apple vinegar.
restaurantgron.com

21.30: If you fancy a tipple, you’ll find A21 Decades a 10-minute wander away. Bartenders put their own stamp on cocktails from different decades, and if you fancy something local, have a look at the Suomi menu, which includes the Suomen Neito (‘maiden of Finland’), for a taste of berries,
gin and fizz at about €15 a pop.
a21.fi.en/decades

10.00: As the country celebrates 100 years of Finnish independence, the Design Museum, which opened in 1873,  has a number of exhibitions planned for 2017. Among them is Enter and Encounter, running until October 22 and focused around all things futuristic, from artificial intelligence to combating climate change.  Another specially commissioned exhibition, Utopia Now, which opened in January, features 75,000 objects, 125,000 photos and 400,000 drawings demonstrating Finnish design.
designmuseum.fi/en

11.30: It’s worth stopping at the Old Market Hall, built in 1888, to browse its fish, meat, fruit, textiles, sweets, preserves, booze, cakes and smoothies. It’s a nice place to stay on for a cheap lunch. Try the Finnish special of salmon soup at Story, served 11am-3pm, for €12.80.
vanhakauppahalli.fi/en 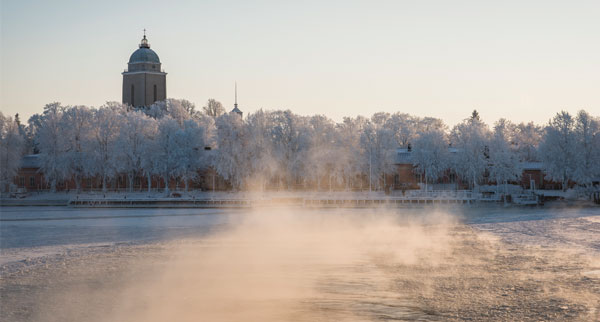 13.00: One of the biggest sea fortresses in the world, Suomenlinna was founded in 1748 and built by field marshal count Augustin Ehrensvärd on an island off the coast of Helsinki. The Unesco World Heritage Site is regarded as a unique monument to European military architecture and is one of Finland’s most-visited attractions. There’s a visitor centre and museum, which also acts as a starting point for walking tours.
suomenlinna.fi/en

17.00: If you’re back in time, there’s a great view of Helsinki from the top of the Finnair Skywheel. In the summer, it stays light until midnight, but in winter a lack of daylight means you’ll be taking in night time views of the city skyline – it’s impressive either way. The Skywheel is open from 12pm-6pm in the week, 11am-7pm on Saturdays and 11am-5pm on Sundays. Entry is €12 for adults. One of the pods has its own sauna, of course, which can be booked in advance.
finnair-skywheel.com/en 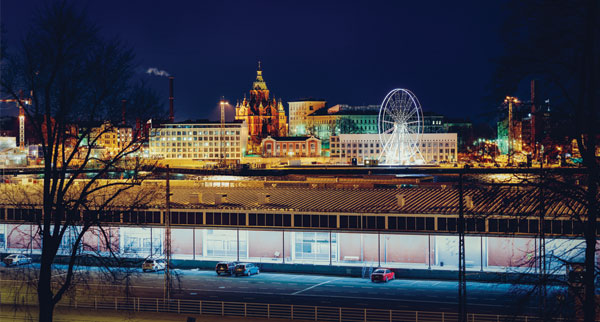 20.00: Enjoy fine-dining at Olo, one of Helsinki’s four Michelin-starred restaurants. The tasting menu here includes subtle modern flavours using local ingredients such as deer, which staff hunt themselves. The dessert of apple with emmer (a type of wheat grain) is a delight.
ovo.ravintola.fi/en

Finnair flies from Heathrow to Helsinki on the innovative Airbus A350 daily, with onward connections from Helsinki to the likes of Hong Kong and Singapore.

The 297-seat A350 has panoramic-view windows, effects that mimic the northern lights in business class, Iittala glassware onboard and free Wi-Fi in business class. It is also said to be 25% more fuel efficient than the previous generation of aircraft.

Return fares from Heathrow to Helsinki start from £116 for an economy seat  and £657 in business class.
finnair.com