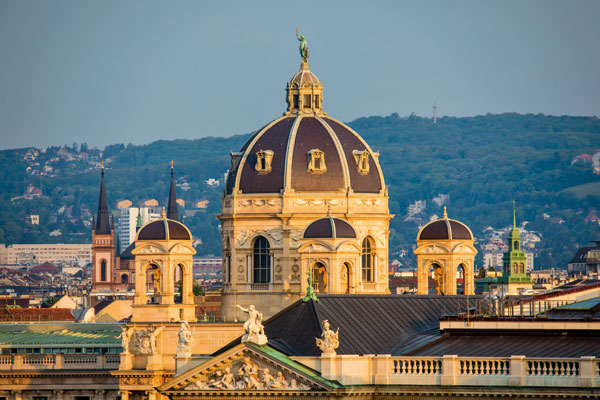 Have a whirl of a time in Austria’s capital, says Tamara Hinson.

Austria’s capital is an explosion of imperial grandeur. It’s a city packed with ancient palaces and extravagant opera houses, but it’s also a very modern capital, with an efficient metro system and fantastic rail access to Europe’s best bits.

Take the time to explore beyond the opera houses and palaces, and you’ll also discover a city which is both wonderfully quirky and achingly cool.

09.00: Start the day with breakfast at the Vollpension on Schleifmühlgasse 16. Referred to by locals as the ‘granny cafe’, it was the brainchild of local designers Mike Lanner and Moriz Piffl, who wanted to create a business which would allow Vienna’s elderly citizens to top up their pensions while also providing a place where they could socialise. Lanner and Piffl also had a mutual love of their grannies’ cakes.

10.00: Equally quirky are the Vienna Ugly tours (€5). Run by Eugene Quinn, a Brit who moved to Vienna seven years ago, the tours are designed to expose visitors to the structures often overshadowed by Vienna’s finery. Highlights of the tour include the garish, multicoloured facade of Leopoldsgasse 39 and the Second World War anti-aircraft towers which loom over the city, which Quinn sees as a reminder of a darker period of Vienna’s history – one often airbrushed from view.

13:00: Head to Lingenhel on Hauptstraße 74 for a light lunch. Part restaurant, part deli, it opened its doors last year and is owned by cheese aficionado John Lingenhel. The monastery-like interior is beautiful, with curved stone ceilings and huge marble tables. You can dine on everything from risottos to enormous sharing platters of local cheeses, although the passion for local produce means that the menu changes daily. There’s also a great range of local wines; Vienna is one of the few cities in the world with vineyards inside its boundaries.

15:00: Time for some retail therapy. The city centre Mariahilfer Straße is where you’ll find the biggest chain stores, but for something a little different, head to nearby Neubau, otherwise known as the 7th district. It’s the Viennese equivalent of Berlin’s trendy Friedrichshain neighbourhood.

The quirky (but expensive) hats made by Mühlbauer, at Neubaugasse 34, have adorned the heads of Brad Pitt, Madonna and Yoko Ono. Even if you’re not splashing out on headwear, the beautifully designed store, with its museum-like displays of colourful hats, is worth a visit. Kingpin, at Lindengasse 37, is a must for rock’n’rollers – here you’ll find everything from vintage bowling shirts to rockabilly dresses and American sweets. Nearby Rotknopf is one of Vienna’s top tailors, specialising in more unusual designs. Stop by this gorgeous boutique to admire (or order, if you’ve got cash to splash) suits adorned with everything from comic strips to world maps.

17.00: Need some sustenance? The Bitzinger Würstelstand can be found in the shadow of the Vienna State Opera – hence the high number of sausage-chomping locals dressed up to the nines. It’s regarded as one of Vienna’s best sausage stands, and you can even wash your weiner down with a glass of champagne. The Käsekrainer, a sausage served with cheese, comes highly recommended.

18.00: For a pre-dinner tipple, head to the Sofitel Vienna Stephansdom’s rooftop bar and soak up the spectacular views over the city. In reality, Das Loft is actually fully enclosed but a colourful, canopy-like roof and floor-to-ceiling windows suggest otherwise.

20.00: The Bank Bar and Brasserie at the Park Hyatt Vienna opened last year. The hotel is located inside the former headquarters of Bank Austria and the restaurant is in the former cashiers’ hall. It’s wonderfully extravagant, with vast expanses of polished oak, enormous chandeliers and lots of gold leaf. Nab a seat by the open kitchen if you can. The menu is diverse but one of the most popular dishes is the steak, cooked on a lava stone. After dinner, enjoy a nightcap at the bar. The quirky cocktails reflect the location – the saffron-infused Tresor, for example, is served in a miniature bank vault. 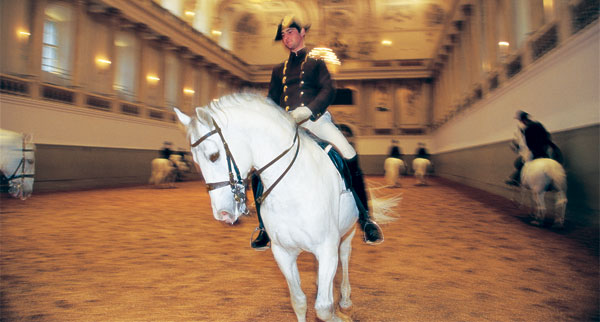 09.00: A cemetery might sound like an odd tourist attraction, but Vienna’s is the second-largest in Europe. The beautifully landscaped Zentralfriedhof is on the outskirts of the city, but it’s easily accessible – hop in a cab or take the Metro to the Zentralfriedhof stop.

Death is of huge significance in Vienna. Funerals, often incredibly extravagant affairs, are referred to as ‘schöne leich’, meaning ‘beautiful corpse’. There are 330,000 graves here, including that of Ludwig van Beethoven.

Don’t forget to check out the cemetery’s Funeral Museum, which explores the Austrians’ approach to death. Highlights include fantastically ornate funeral carriages and burial outfits, while more-bizarre exhibits include a foldaway coffin and a rescue alarm that could be attached to the bodies (the big toe, specifically) of those who feared being buried alive. A jukebox allows you to browse and listen to the world’s most popular funeral songs.

12.00: Time for something more traditional. The Spanish Riding School is the only place in the world where classic equestrian skills (haute école) are still practised in their original form. Rehearsal sessions, which are open to the public, take place in the impossibly grand training hall, with its huge chandeliers and ornate balustrades.

A tour of the stables is also worth signing up for. You’ll learn how every one of the riding school’s Lipizzaner horses has their own diet, personal trainer and personalised saddle, and how, in the summer, they go on holiday to the rolling hills of Heldenberg in Lower Austria. A combi ticket, which includes a tour of the stables and rehearsal attendance, costs £26.

14.00: Satisfy your need for speed by signing up for a two-hour Hot Rod Tour (from £82). It allows visitors to whizz around Austria’s capital in single-person, soapbox-style motorised vehicles. You’ll keep in touch with your guide via a radio, and the tour includes pit stops outside several key locations, including the Hofburg Palace. Don’t forget to bring your driving licence.

16.00: The city centre Museumsquartier is one of the world’s largest cultural quarters. It’s filled with museums and galleries as well as cafes, restaurants and bars. Visiting every museum would take several days, but must‑sees include the slate-grey Museum Moderner Kunst (known as Mumok), where you’ll find Austria’s finest collection of modern art, and the Zoom Children’s Museum, which has a fantastic multimedia laboratory and animation studio.

19.00: Dusk is one of the best times to visit historic fairground Wiener Prater – the crowds have thinned but the higher rides offer breathtaking views over Austria’s twinkling capital. Located in a large public park in Vienna’s 2nd district (Leopoldstadt), the fairground has more than 200 attractions, including a giant Ferris wheel which has been in operation since 1897. There’s also a Madame Tussauds, 5D cinema and planetarium. 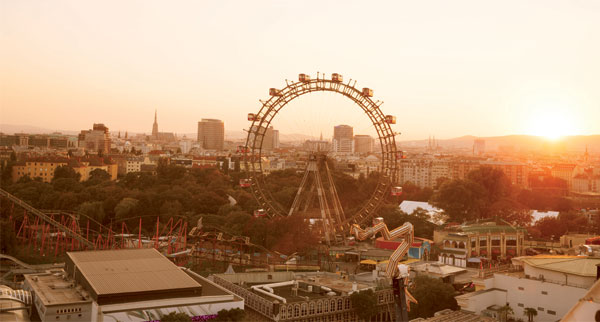 21.00: Raise a final toast to Vienna at the Albertina Passage, a restaurant and bar at the Vienna State Opera. The food is a mix of traditional Viennese and international, and there’s a stunning cocktail bar, surrounded by walls which can be illuminated in different colours. There are regular live music sets too. Jazz seems to the most popular genre but the city’s top DJs are also frequent visitors.

Thomas Cook City Escapes offers a three-night package staying room-only at the four-star Hotel Nestroy from £209, based on two sharing with flights  from Luton.
thomascook.com

Save: Magdas Hotel
Two-thirds of the 30 staff at this stylish, 88-room hotel are former asylum seekers, and together they span 16 nationalities. The hotel was set up by the charity Caritas as a way of helping asylum seekers integrate. It’s located on leafy Laufbergergasse, just a short walk from the city centre. There are several categories of accommodation, but all the rooms are gorgeous – local art students helped design the hotel. There’s also a beautiful, tree-filled patio area. Doubles from £51 per night.
magdas-hotel.at

Spend: Sofitel Vienna Stephansdom
There are 182 rooms at this super-sleek, modern hotel, which is also one of Vienna’s tallest buildings. Perks include Nespresso machines and Hermès toiletries. Its location on the border of the 2nd district means that it’s just a short walk to the city centre and just a few metres away from the bustling riverside. Doubles from £189 per night.
sofitel.com

Splurge: Park Hyatt Vienna
This five-star hotel is on Am Hof square and it’s also just a five-minute walk from the Hofburg Imperial Palace. There are 143 rooms, along with a gorgeous spa – make sure you squeeze in a dip in the beautiful pool, housed in the former vault. Doubles from £401 per night.
vienna.park.hyatt.com