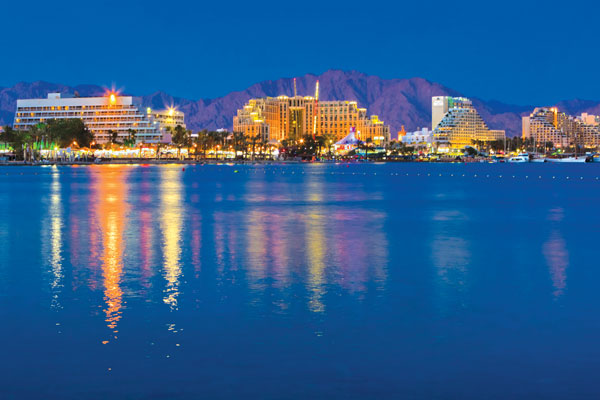 Laura French heads to Eilat, Israel, to find out what this southerly desert city is all about.

I’m in another world. Aquamarine bubbles glitter under the light of the streaming sun. Coral formations in flamboyant shapes and colours – luminescent yellow, lime green and translucent peach, morphed into giant brains – are inches away from my mask, and the warm, calm water crackles with the sound of fish nibbling.

I’m snorkelling in the Red Sea, and it’s extraordinary. But I haven’t quite found what I’m looking for yet.

And then I glimpse it; a sleek, silver-blue dolphin, stretching out its long, supple body. A smile of pleasure, almost human, spreads across its face as our guide lovingly strokes its belly. Before I know it we’re joined by two more, whooshing back and forth as they battle for our attention in a show of sibling rivalry at its most endearing.

I’m at Dolphin Reef – a palm-fringed beach home to a pod of four bottlenose siblings – in Eilat, Israel’s most southerly city.

Back on the map

Chances are, if you were alive in the 1980s or 1990s, you will remember this resort city, set on the country’s south coast and sandwiched between the Red Sea and Negev desert. At that time it was a holiday hotspot, popular with fly-and-flop Brits after good-value sun and calm, sandy beaches.

Then it fell off the radar, and today it’s more domestic than overseas tourists that flock to its scorching shores.

“Eilat is busy, brash and a little rough at the edges but beyond the surface there’s a horde of riches.”

But a new international airport opening in 2018 – alongside more than 2,000 hotel rooms set to be built on the site of the current airport – are putting it back on the map. That means if you’re not already selling this place, it’s time to start.

Sure, it’s busy, brash and a little rough round the edges, with fluorescent lights, tax-free shopping malls and large all‑inclusives crowding what was once an escape for bohemian types. But beyond the surface there’s a horde of riches – world‑class diving, vast desert and proximity to sights such as Petra, Jerusalem and the Dead Sea – which make it a worthy suggestion for those looking to explore more than just the beach.

Throw in a largely English‑speaking, Western culture and year-round sun (highs of 20C in January and 40C in July), and you have an alluring alternative to the likes of Egypt and other blue-sky destinations which continue to struggle in the face of security concerns. 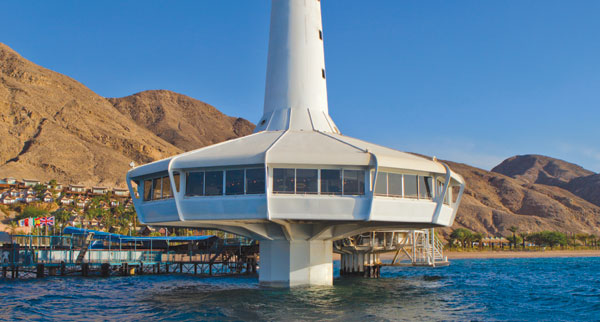 My guided snorkelling session at Dolphin Reef lasted an hour, for £61, but it wasn’t the only undersea adventure that had me charmed. The entire resort is a diving and snorkelling paradise, thanks to a mile-long protected reef where parrotfish, lionfish, rays and occasional whale sharks dart around vibrant, otherworldly coral formations.

For the best chance of glimpsing it all, suggest Coral Beach Nature Reserve, where snorkellers can jump in from the shore, and bridges, buoys and a coral wall form a trail which makes it ideal for beginners (entry to the beach costs around £7; snorkel hire about £5).

“A smile of pleasure, almost human, spreads across the dolphin’s face as our guide lovingly strokes its belly.” 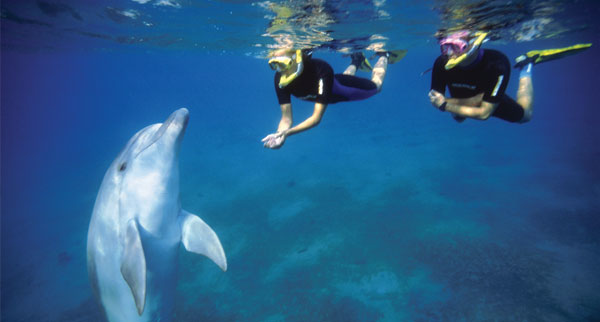 There are myriad other ways to experience this colourful universe. Nearby lies the Underwater Observatory, a 360-degree viewing deck built into the sea that enables visitors to admire the giant coral trees, schools of glistening fish and cobalt-blue water from behind the glass. There’s also a shark pool, dark room filled with phosphorescent fish and oceanarium playing films, alongside around 40 other tanks, all of which make this the biggest aquarium in the Middle East. Entry is from £20 for adults and £15 for children.

My highlight on the attractions front, though, was Stalbet Al Hamaim, a chilled-out, trendy spot featuring three indoor saltwater pools at Dolphin Reef. Tropical trees, bamboo canes, beanbags and daybeds surround this oasis-style complex, and underwater massage therapists offer unique treatments where you’re guided round on floats to a backdrop of soft, therapeutic music. It’s adult-only and costs £67 for two hours, including the 30-minute massage.

What gives Eilat its particular appeal, however, is its proximity to the vast, mountainous desert. Layer upon layer of rock characterise the landscapes here, blending camel-coloured sandstone, granite and limestone with flecks of red, brown and black in molten, rainbow-like formations.

Jeep See Eilat offers tours to explore it all on a 4×4, taking you up the mountains along dusty, bumpy tracks to get unbeatable 360-degree views over the surrounding areas. On a two-hour, rollercoaster tour spent jumping off our seats – and listening to our eccentric guide Naftaly sing Bob Marley songs – we clambered up to a viewpoint that hasn’t left me since: a bright white, full moon glaring out from a midnight-blue sky, mountains stretching on into seeming infinity and clusters of orange lights twinkling from across a stretch of deep blue sea. 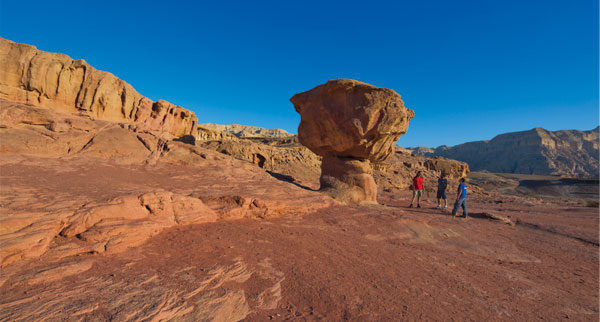 Just as memorable was a camel ride through the valley, which had us carving our way through the hot, dusty air, accompanied by nothing other than the calming, rhythmic sound of hooves kicking up the gravel. Our one‑and-a-half hour ride with Camel Ranch cost about £31.

“I can vouch for the mud treatment, which had me wrapped in a green-brown sludge – I felt like an Egyptian mummy.”

Beyond Eilat itself lies a string of attractions to explore too. Among them is Timna Park, a sprawling archaeological site stretching 25 square miles through the desert and home to the world’s oldest copper mine. Here vibrant red sandstone formations tower over a network of hiking trails, and rock art carvings dating back to at least the 13th century BC show how these sizzling-hot, extraordinary landscapes have remained unchanged for millennia. It’s big, so clients will need a car; entry costs £10 per person. 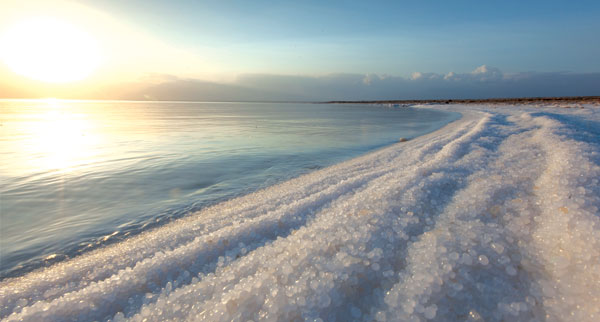 For those with a little extra time on their hands, suggest venturing even farther afield. Ein Bokek, set on the Dead Sea and home to a cluster of hotels, is relatively accessible at around two hours’ drive to the north and offers an intriguing alternative to the Jordanian side of the water. The sparse desert landscape is strewn with clumps of snow-white salt deposits, making it look like it’s been plucked straight out of Antarctica. And floating in the Dead Sea’s bath-warm, mirror‑flat water – the lowest body of water in the world, at 423 metres below sea level – was as surreal and serene as I’d imagined.

For a large, family-friendly place to stay in the area, recommend the five-star Herods Dead Sea Hotel, home to an outdoor and indoor pool, large buffet restaurant, modern rooms and Dead Sea-inspired spa. I can vouch for the mud treatment, which saw me smothered in a hot and slimy green-brown sludge and cocooned in cling film for a solid 20 minutes. It sounds bizarre, but my skin enjoyed it, even if I felt a little like an Egyptian mummy. 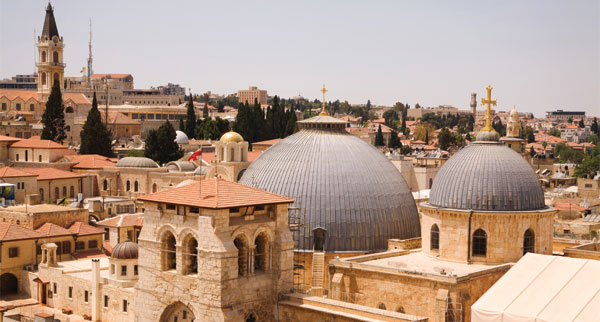 No trip to Israel would be complete without a stop in Jerusalem, of course, and at a four-hour drive from Eilat this iconic city is more than doable as an overnight. Glimpsing sights such as the Church of the Holy Sepulchre and the Western Wall first-hand – while traversing the city’s web of narrow, souk-like backstreets, whiffs of rosemary-baked bread filling my nostrils – was unforgettable.

It felt a world away from how my trip had begun – in the company of a big, friendly dolphin – but it’s that very diversity that makes this ancient, intriguing country quite unlike anywhere else in the world.