Lounging on an outdoor terrace with swoon-worthy views of Maltese capital Valletta’s Grand Harbour, I’m tucking in to fresh fish while marvelling at the country’s dazzling culinary scene.

We’re dining at the city’s much-lauded Panorama restaurant, one of Valletta’s dizzying number of gourmet hangouts. Tipped as one of Lonely Planet’s top 10 countries to visit in 2018, most holidaymakers head to Malta to savour its perennial sunshine and epic history, but I’m here to experience the country’s burgeoning food and wine scene.

While Malta doesn’t have the same reputation for top nosh as other Mediterranean countries, it turns out to be an unexpected foodie hit with some seriously good gastronomical treats that blend Italian and Arabic cuisine: think mouth-watering fish, world-class wine and locally-sourced farm fare. 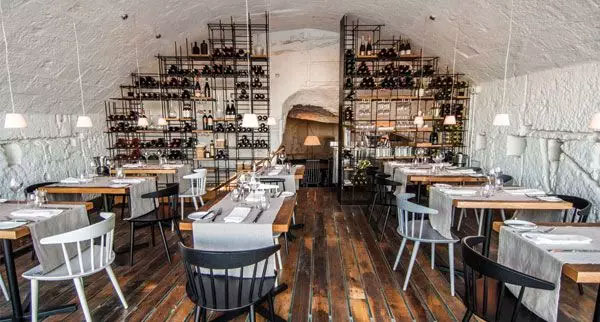 Eating out in Valletta

Valletta is having a moment this year as the 2018 European Capital of Culture, and the spruced-up city is brimming with honey-coloured buildings, cobbled streets, palm-filled gardens and atmospheric squares.

It’s also full of charming coffee houses, where locals and tourists drink Italian-style coffee and pig out on pastizzos: melt-in-the-mouth pastries stuffed with cheese or mushy peas. Like their Sicilian neighbours, locals take their coffee very seriously: our guide confesses to drinking six espressos every day before noon!

I get my caffeine fix at Valletta stalwart Caffe Cordina, set in a historic palazzo backed by palm trees. Established in 1837, the cafe has a large outdoor terrace and a grand interior, not to mention a counter groaning with delectable cakes.

“Like their Sicilian neighbours, locals take their coffee very seriously: our guide confesses to drinking six espressos every day before noon!”

For travellers with cash to splash, the capital has a healthy sprinkling of high-end restaurants, including warehouse-turned-eatery The Harbour Club, with its waterside views; and Ic-Civil (formerly Michael’s), which blends traditional and cutting-edge cuisine, set in a historic building. My personal favourite is Panorama, where the Mediterranean menu features a range of standout plates, including rabbit terrine.

Food aside, a Valletta must-see is St John’s Co-Cathedral, where an austere facade belies a blow-the-budget gilded interior, home to Caravaggio’s largest painting and his only signed piece of work. 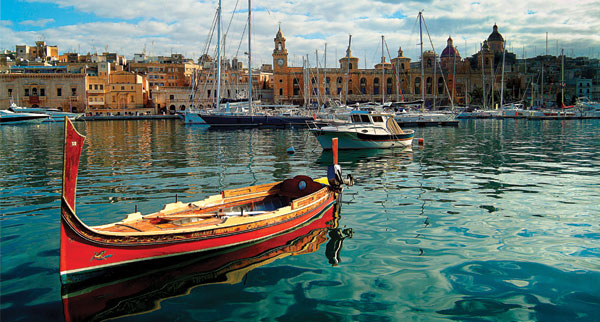 “Top of every gourmand’s list should be the mouth-watering lampuki (mahi-mahi), commonly served with tomatoes, olives, onions and basil.”

Vendors peddle fresh fish, vegetables and spices, as well as tacky souvenirs: think baseball caps with built-in fans and I Love Malta towels. But the real stars of the show are the Insta-worthy, brightly coloured fishing boats that bob gracefully in the bay’s harbour.

Lining the waterfront are a string of fish restaurants, serving fish that has been caught in the last 24 hours. Top of every gourmand’s list should be the mouth-watering lampuki (mahi-mahi), commonly served with tomatoes, olives, onions and basil. 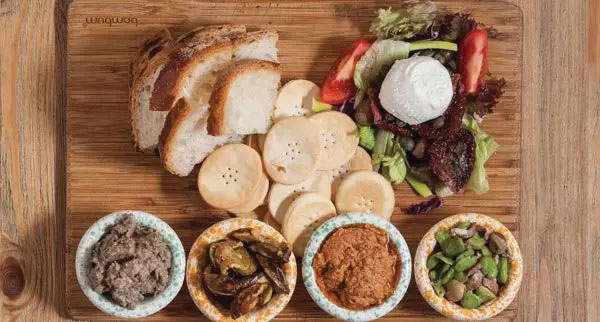 Along with fish, Malta brims with restaurants offering locally-sourced farm food. Foodies seeking authentic Maltese rural food should make a date at Diar il-Bniet, a characterful restaurant within a historic farmhouse in Dingli village. Much of the produce for the restaurant is grown just 200 metres away on their 600-acre farm. I gorge on flavourful and hearty stuffed aubergines with fresh-minced beef, washed down with delicious house wines produced at the farm’s 12th-century organic olive grove.

“Foodies seeking authentic Maltese rural food should make a date at Diar il-Bniet, a characterful restaurant within a historic farmhouse in Dingli village.”

Craving some adventure, we follow lunch with a three-hour Segway tour, leaving Dingli village to zoom through lush countryside to the Dingli Cliffs, the highest point of the Maltese islands with heart-melting ocean views.

Glorious food can also be found on Malta’s sister island Gozo, most famous for its year-round diving. For traditional Maltese fodder, recommend that visitors book a table at rustic tavern Ta’ Rikardu, tucked inside the ancient walls of the lofty medieval citadel.

“For traditional Maltese fodder, recommend that visitors book a table at rustic tavern Ta’ Rikardu, tucked inside the ancient walls of the lofty medieval citadel.”

Other must-try meals at Ta’ Rikardu include the homemade cheese-filled ravioli, rabbit stew, and sumptuous platters loaded with cheese, bread, tomatoes, capers and olives, which can be washed down with Rikardu’s Gozitan wine.

Also worth a visit on Gozo is Ta’ Philip, near the ferry port of Mgarr, where diners can enjoy a smorgasbord of Gozitan food (sourced entirely on the island) and cooked using traditional methods in a wood-fired oven. 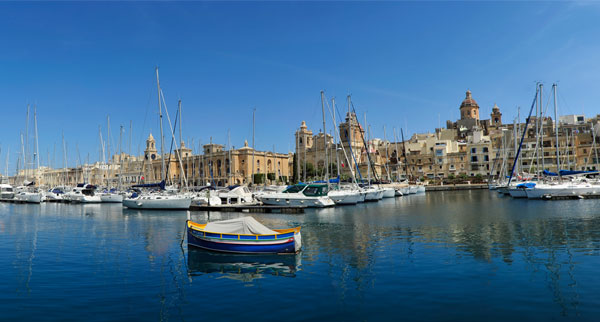 Perfect for those with a passion for food and history are the Malta Maritime Museum’s heritage dinners, which offer guests the unique opportunity to feast on the kind of food and wine that was enjoyed by corsairs 300 years ago.

“Dining on the historic museum’s pretty terrace, overlooking the twinkling lights of the Birgu marina, we tuck into dishes created from age-old recipes.”

The museum can be found within the under-the-radar fortified city of Birgu, where cobbled streets are bejewelled with brightly-coloured front doors and decorative knockers, a must-visit for photographers and Instagrammers. 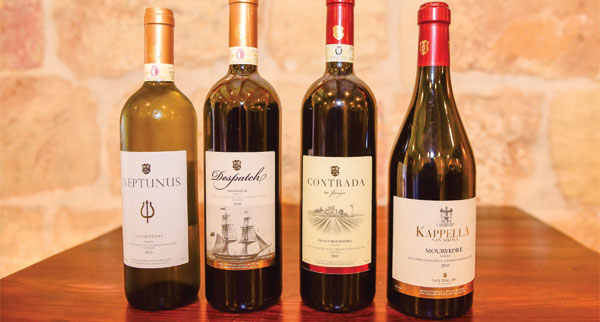 To complement the island’s spectacular cuisine, there are a growing number of small-scale wineries on Malta and Gozo, with many gaining international recognition.

We visit the boutique San Niklaw winery near Zejtun on the main island, which is open to visitors for private guided tours all year round. Run by the island’s only paediatric surgeon, San Niklaw is a small family estate with an olive grove of 500 trees, set against a backdrop of blue skies and verdant countryside. These wines can be found in some of Malta’s high-end restaurants, including The Harbour Club in Valletta.

“We visit the boutique San Niklaw winery near Zejtun on the main island, which is open to visitors for private guided tours all year round.”

We enjoy a delicious lunch cooked by a local restaurateur and enriched by full-bodied, world-class wines produced from syrah, vermentino, sangiovese and mourvèdre grapes on the estate.

With a bellyful of food and wine, Malta has been a feast for the senses, with rich cultural attractions and bountiful dishes. The country’s glorious gastronomy is most definitely one of its key selling points; now I’m just left to wonder what’s for dinner… 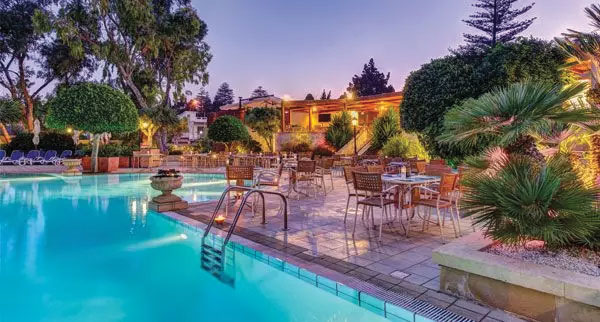 Set in a beautifully restored 19th-century villa, the classy Corinthia Palace Hotel is Corinthia Hotels’ original flagship and one of the island’s leading grande dame properties.

Based in the centre of Malta in upscale San Anton, this 150-room hotel is just steps from the president’s residential palace and its public San Anton Gardens, and a 10-minute drive from Valletta and the medieval city of Mdina (of Game of Thrones fame). The hotel offers a free shuttle service to Valletta, Sliema and Marsa Golf Club.

“For guests seeking relaxation, there’s a spa with an indoor pool, sauna and steam room, and a lengthy range of treatments.”

Bright, spacious rooms come with large balconies overlooking the hotel’s lush gardens. For guests seeking relaxation, there’s a spa with an indoor pool, sauna and steam room, and a lengthy range of treatments. There are also tennis courts, a gym and a grand outdoor swimming pool.

Book it: A deluxe bedroom with breakfast starts at €160 in May.
corinthia.com/en

Mercury Holidays offers four nights’ bed and breakfast in a deluxe room at the Corinthia Palace Hotel for £338 per person, including flights from Gatwick and transfers, departing November 28.
mercuryholidays.co.uk/travel-agents

Prestige Holidays offers seven nights’ bed and breakfast in a deluxe room at the Excelsior Grand Hotel Malta from £975 per person, including Ryanair flights from Luton and transfers, departing May 16.
prestigeholidays.co.uk