We take a look through the Travel Weekly archives in our 50th year to find out what was making the headlines 10, 25 and 45 years ago

• Swine flu continued to dominate headlines, with the Department for Transport asking airlines to ensure staff were trained to recognise symptoms, and fears growing that holidaymakers would avoid travel to the US and Mexico.

• Thomson Cruises vowed to resume ex-UK departures when it got another ship, after announcing it would be pulling out of the UK in 2010; Tui Travel revealed it was dropping its Trips Worldwide and Magic of the Orient brands; and Crystal pulled its 2009-10 Lapland programme because of insufficient bookings.

• Travel companies hailed the phone as still the best sales channel. Lowcost Travel Group chief executive Paul Evans said: “Telephone is our most successful sales channel and brings higher-value business. On a decent website you might get a conversion rate as high as 7%, but as for all this stuff about ‘sexy online play’, don’t kid yourself. If it’s a multi-product site, conversion could be 0.5% – that’s half a person in every 100.” 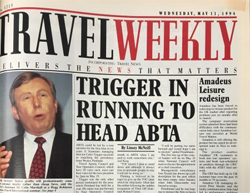 • It was reported on the front page that Abta could be led by a tour operator for the first time in six years if Scantours managing director Colin Trigger succeeded in snatching the presidency from Wesley Pentland. Lunn Poly, meanwhile, said bookings in February and March were down on the previous year. The average price of an all-inclusive holiday with the agency was £376 – £2 lower than in 1991. 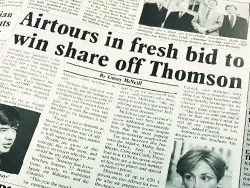 • Airtours launched a further attack on Thomson’s share of the summer-sun market by bringing out a new short-haul brochure, Summer Sun Extra, and raising agent commission to 15%. It said the brochure featured 100,000 extra holidays, but Thomson disputed this.

• Meanwhile, Sunvil Holidays managing director Noel Josephides said a talk he gave at the European Tour Operators’ Association about Aito’s bonding scheme left him despondent about the way the European Commission conducted affairs. “God help us all. I could almost become an ultra-right-wing Tory,” he wrote in his column. 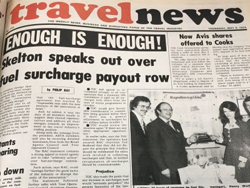 • Abta president George Skelton declared the row over fuel surcharge commission had “gone on long enough”. Meanwhile, it was reported the Cook International group had been approached about taking a stake in Avis, after a deal with American Express collapsed.

• Sri Lanka astounded pessimists by posting its highest-ever number of overseas visitors in a single month, 10,915 in January. 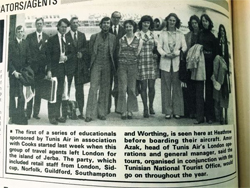 • The first of a series of educationals sponsored by Tunis Air with Thomas Cook took agents (pictured) from London to Djerba. Meanwhile, it was reported Club 18-30, in its second year of operation, was expected to break even, and had contracted more rooms in Corfu and Ibiza.