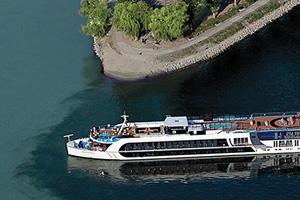 Disney is to partner with AmaWaterways to offer family-focused river cruises on the Danube from 2016.

A new AmaWaterways vessel will run the seven-night voyages between Budapest, Hungary and Vilshofen in Germany.

Cabins will be configured for families with the ability to accommodate up to five people. Shore excursions and onboard activities are also being designed to be family-friendly.

Adventure guides will run special entertainment activities for children such as movie nights.

Disney will add interactive games to family competitions on the ship’s top deck, and the company is lining up parks along the route where families can take a break from touring to play sports.

Custom-designed, family-friendly shore excursions will range from family bike rides along the Danube, to learning archery and other medieval activities at a historic castle, to strudel making.

“We think the Disney brand will bring families to the river cruising category, and we think that’s a very exciting development for the industry,” Disney executive Ken Potrock told USA Today.

The sailings will be separate from those offered by the 17-year-old Disney Cruise Line, which operates four ocean-going vessels.

The initial cruises will include stops along the Danube in Passau, Germany; Linz, Melk and Vienna, Austria; and Bratislava, Slovakia.

Potrock, who runs Adventures by Disney as well as the Disney Vacation Club, said: “We aspire to more, both in terms of the number of departures and the rivers that we consider, and (also) in terms of the geographic locales from a worldwide perspective.

“We think the response is going to be great, and we’re already having conversations about what more could look like.”

The boat will have four suites with beds and pull-out sofas that can hold a family of four. An additional 12 cabins will be able to hold up to three family members, thanks to chairs that convert into an extra bed.

There also will be six sets of adjoining cabins that can be connected via a sliding door. The interconnecting cabins will allow for four or five members of a family to share.

“We really wanted to build this from the ground up [for families],” he said. “The traditional river cruising vessel is staterooms for two, and families don’t travel in that configuration. Sometimes they travel in three and four and five, and multi-generational, and families traveling with other families.”

Karst told the newspaper: “I think there is hidden demand [for family river cruising] that is there but has never been developed.”

River cruising is “a fantastic product for children,” she added.

“Not many have come on board yet, but when [they do] they always enjoy it.”

The line has shifted its typical sailing schedule on the Danube for the Disney departures to leave more time in ports for family activities.

USA Today quoted fares for the new Disney river cruises as starting at $4,179 per person, based on double occupancy, including all meals, gratuities, wine with dinner and transfers between the ship and airports.