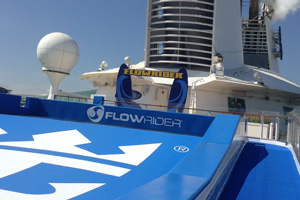 Royal Caribbean International is starting a nationwide radio brand advertising campaign from today (Friday) as part of the line’s efforts to encourage more first-timers on board.

The company will be pushing its overall brand proposition – appealing to adventurous couples and families – with no mention of price, according to UK and Ireland managing director Stuart Leven.

He was speaking on board the newly refitted Explorer of the Seas which departs on its maiden summer sailing from Southampton on Friday to the Canary Islands.

The 15-year-old ship has just emerged from a 40-day revamp as part of a $300 million fleet-wide project to retrofit popular elements from the company’s newer vessels.

Capacity on Explorer of the Seas has been increased with an additional 86 cabins including some with floor to ceiling panoramic windows and inside accommodation featuring virtual balconies.

Other new features introduced to the ship include a Flowrider surf simulator, giant poolside cinema screen, a Japanese sushi restaurant, a family-style Italian dining option and a sports bar.

A group of 100 agents were given a preview of the new elements during a day in port prior to the ship’s first cruise of the summer season and others will be invited on board on turn around days until its leaves in October to operate in Australia in winter and Alaska next summer.

Revealing the new radio advertising push with a focus on “experience and emotion,” Leven said: “The biggest challenge we have in the UK is those who are indifferent to cruising to try to get them to try it for the first time.”

Once they have tried cruising with Royal Caribbean, eight out of 10 will return within two years, he added.

Alterations to the ship include creating a whole new deck of cabins at the front of the ship, the Izumi Japanese restaurant replacing a card room, the Giovanni’s Table Italian restaurant positioned where a night club used to exist, a new retro R Bar and The Tavern with large TVs for screening sports. Cabins have flat screen TVs and the ship carries digital wayfinders to help passengers navigate the 137,000 ton vessel.

Leven said: “To all intents and purposes this is a new ship operating in the UK market.”