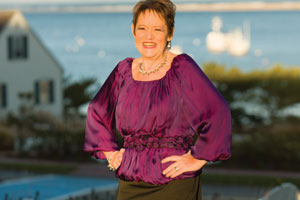 A year before the Cover Stars Massachusetts trip, Holidaysplease homeworker Yvonne Powell would not even have considered a fam trip to the US.

She found educationals exhausting and hated having her photograph taken because she weighed 18st 3lbs. But over the following 12 months, Yvonne changed her life by losing an incredible 9st 3lbs.

Now a trim 9st, she recalls how she applied to become a cover star because she finally felt happy to pose in front of a camera again – and had the energy for an educational.

“What finally did it was nearly having to ask for a seatbelt extension on a flight,” she says. “And I hadn’t had my photo taken for years. I always hid behind people in pictures.”

But rather than turning to slimming clubs, the 56-year-old put herself on a strict diet and slashed her portion sizes by eating from a tea plate instead of a dinner plate.

“I also cut out bread, cheese and wine, and ate healthy meals of meat and fish,” says Yvonne. “The weight just dropped off.

My husband couldn’t believe how disciplined I was.

“Losing the weight prompted me to go on this trip. A year before, I would have struggled to do it because I wouldn’t have been able to keep up with people.”

Being able to enjoy the trip, which included a lot of walking around Boston as well as Cape Cod, made all the weight loss worthwhile.

“It’s such a walkable city,” she adds. “It was easy to get around, with so much to see.”

But for Yvonne, the opportunity to “shop until she dropped” after years of ordering clothes only from mail-order catalogues was a highlight.

“It was my first proper shopping experience since losing the weight and I went mad. I had no problem filling the extra suitcase we were given.”

She has even lost a further stone since returning from the trip: “I’ve had to tweak the waists of all my trousers since.”

The photoshoot at Chatham Bars Inn also turned out to be one of her favourite experiences of the trip, despite having to pose for pictures in the freezing cold.

“When I told people who know me, they just couldn’t believe it,” adds Yvonne.