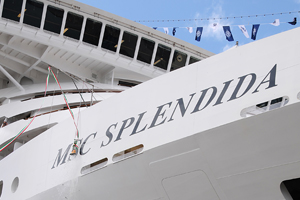 MSC Cruises has set a new world record of 14 minutes, 26 seconds for the fastest mile by a marching band on board one of its ships, MSC Splendida.

Musicians from the British Imperial Military Band completed multiple laps of a specially-measured circuit of the ship’s pool deck to complete their record-breaking feat, watched by hundreds of guests.

The band of 21 serving and former military musicians agreed to the challenge even though it involved marching at a 150 beats-per-minute pace. It was overseen by an official Guinness World Records adjudicator.

The record-breaking feat took place while the cruise ship was berthed in Southampton and comes as the line launches its Get the Best campaign, its biggest-ever autumn promotion of free balcony upgrades on the vast majority of sailings until winter 2016-2017.

This covers all 12 ships for bookings made between September 4 and November 30, 2015 and is valid on cruise-only and fly-cruise packages. It offers a balcony cabin for the price of an inside cabin, with seven night fly-cruises to the Mediterranean starting at £499 per person.

MSC Cruises executive director UK and Ireland, Giles Hawke, said: “For the next three months we will be giving UK holidaymakers the chance to get free balcony cabin upgrades on the vast majority of our sailings through until winter 2016-2017.

“That’s the sort of deal that deserves a proper fanfare – and should certainly get people marching to their travel agent to book!”