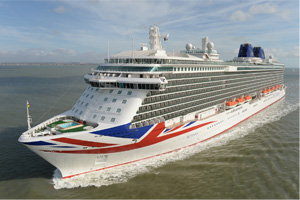 A group of celebrities has been lined up to appear in a TV cookery contest to be filmed on board P&O Cruises’ newest ship Britannia.

Filmed over two Mediterranean cruises on Britannia, each itinerary will be host to its own self-contained competition featuring five celebrities, who will each assume the role of head chef and prepare a meal for the Captain and his VIP guests.

Battlechefs is due to be screened on television network UKTV’s Watch entertainment channel next year.

“Our cookery school on board provides the perfect backdrop for the show as the celebrities prepare speciality dishes from around the Med.”

“It’s an energetic show which centres on challenge and good-hearted rivalry, which sits perfectly alongside Watch viewer favourites such as the hugely popular Masterchef Australia.

“Seeing whether our celebs can pull off the menus they’re given against the clock is going to be very entertaining.”