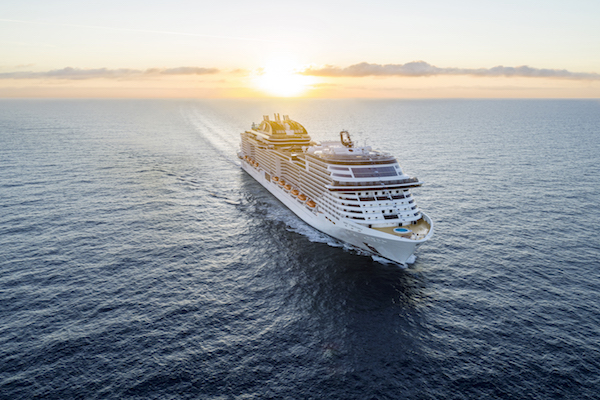 MSC Cruises’ new flagship Virtuosa will sail with just 1,000 passengers for its month and then at 80% of its 6,000-passenger capacity for the rest of the summer, the line’s UK & Ireland boss has revealed.

Speaking on a Travel Weekly webcast, Antonio Paradiso said: “From May 20 to June 21, we will be operating at a reduced capacity. So 1,000 passengers max onboard.

“Then, as soon as the restrictions are lifted in the UK, we’re planning on increasing the capacity of course, but we will always have some sort of cap in place because, as part of our health and safety protocols, we have a dedicated section of the ship should there ever be a Covid outbreak or a problem on board.”

Paradiso added: “After June 21, we’re looking at 80% capacity – around that, so there will be plenty of space on board.”

As things stand, MSC Cruises will be the first cruise line to begin domestic sailings around the UK. At least 12 other lines have announced plans to also offer staycations at sea for British customers this summer, but most are starting at the end of June or early July.

Asked if MSC’s experience of operating cruises in the Mediterranean last summer had given it the confidence to begin operations sooner than most lines, Paradiso said: “Somebody has to start sooner or later. And I said why not us? It would be great if MSC would start first and yes, let’s say the advantage or the experience we have at the moment is very, very helpful.”

MSC carried at least 50,000 passengers on cruises in the Mediterranean last year.

“We’ve been testing this protocol since [August] last year, and we’ve had on board more than 50,000 safe and more importantly happy customers,” Paradiso added.

“So we feel rather confident in our health and safety protocol and we’re looking forward to replicating the success we’ve had in the Med in Southampton.”