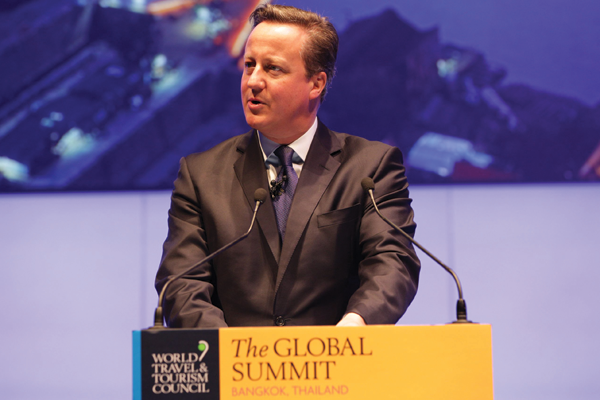 Former UK Prime Minister David Cameron hailed the Paris agreement on climate change as “a huge global achievement” ahead of President Trump withdrawing the US from the deal and warned tourism “will suffer from climate change if it isn’t reversed”.

In an interview with Travel Weekly, Cameron said: “We made huge progress with Paris. It was a huge global achievement.

“Frankly, I am worried that the US administration is not prioritising the issue. This is an argument where Britain should not stand aside.”

Cameron warned: “The tourist industry will suffer from man-made climate change if it isn’t reversed.” He urged industry leaders: “Don’t stand aside.”

The former UK prime minister defended the system of travel advisories against criticism from the UN World Tourism Organisation (UNWTO) and, in particular, the continuing ban on UK flights to Sharm el Sheikh.

He said: “I ask the industry for some understanding. Of course, we want to see an expansion of tourism. Of course, we know how important tourism is to the Egyptian economy.

“But we have to put public safety first.”

Cameron also made a plea for more understanding from the industry on visa restrictions and border controls.

He said: “We understand why you would push for more travel, fewer visa restrictions and more open borders. That is your interest.

“But if you’re arguing let’s have visa-free travel from everywhere, that is not going to happen.”

However, Cameron insisted: “I’ve always been a believer in the power of tourism. I don’t think it is understood by everybody.”

He said: “The tourism industry has to emphasise not only the rapidity with which it can create jobs but, also to talk about quality.”