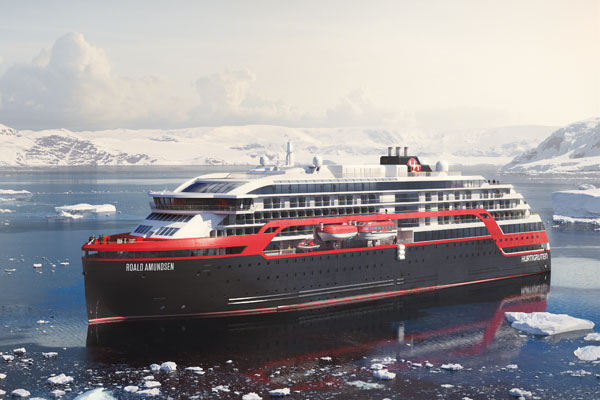 Details of the first voyages by Hurtigruten’s pair of battery-powered hybrid ships in 2019-20 are revealed today.

Currently under construction at Kleven Yard in Norway, MS Roald Amundsen and MS Fridtjof Nansen will debut in 2018 and 2019.

They have been branded as the world’s greenest, safest and most advanced expedition ships.

A science centre on board will include areas for workshops in photography and biology and act as onboard base for Hurtigruten’s handpicked expedition teams.

All cabins will have outside views with half having. Balconies. Aft suites will feature private outdoor Jacuzzis.

Both ships will have three restaurants inspired by Nordic and Norwegian heritage.

The line’s chief executive, Daniel Skjeldam, said: “With the great explorers deeply rooted in our history and heritage, Hurtigruten aims to be one step ahead when exploring the world.

“Our new ships will be moving boundaries for the technology, for the industry and for our guests.

“Hurtigruten’s growing fleet of custom built expedition ships takes our guests to some of the world’s most spectacular destinations.

“From the majestic wildlife on Svalbard, the rugged fjords of eastern Greenland and the beauty of the Norwegian coast to the untouched wilderness of Antarctica. Nowhere else comes close.”