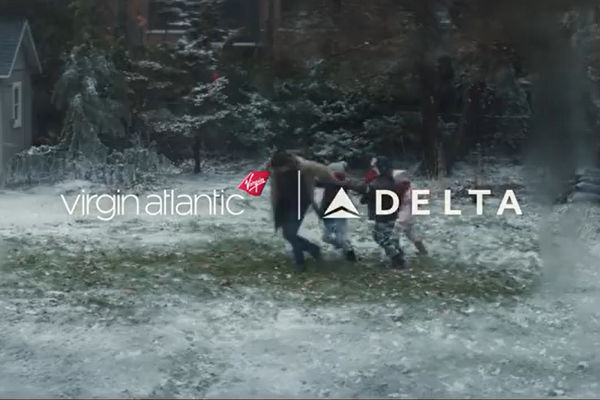 The first instalment of a joint marketing strategy, the 3:30 advert, named the Prodigal Brother, tells the story of two estranged brothers who are reconciled on Christmas morning.

One brings scarves for the other’s children, regaling them with tales of a Sherpa, the ‘magic’ behind the scarves and a wise man named Socrates while apologising for past events.

The story, also cut to a 2:10 segment and 15-second trailer, gives the message that the most important part of the festive season is being together with the people that matter the most.

Created by Figliulo&Partners (F&P) the campaign, “Together, we make togetherness,” will launch in the U.K. and the U.S. today.

“As two pioneers from either side of the Atlantic, we’re on a joint adventure to defy convention and break some marketing category rules,” said Claire Cronin, senior vice president marketing, Virgin Atlantic.

“This is the first instalment in a joint marketing strategy that has been developed by a highly collaborative marketing team from both organizations. As partners, we’re excited to co-create a better experience for our shared customers and a brighter, flying future.”

“Travelling to be with family and friends is what matters most during the holiday season,” said Corneel Koster, Delta’s senior vice president of Europe, Middle East, Africa and India. “With over 40 nonstop daily flights and more than 200 connections between the U.S. and the U.K., combined with our industry leading operational performance, the partnership between Delta and Virgin Atlantic makes it easier and more enjoyable for our customers to get together with their loved ones.”

The Prodigal Brother was directed by commercial director Tim Godsall, who has developed adverts for Old Spice, Southern Comfort and ESPN. The campaign will run in both the US and the UK through December 25 and be available across all of Delta and Virgin Atlantic’s social channels and on-demand video in the UK.

“Christmas advertising is filled with big, emotional storytelling. We wanted to deliver that feeling, so we went with the classic Christmas story about a dead yak, a magic spider, Socrates and karate.” said Scott Vitrone, partner and chief creative officer of F&P.