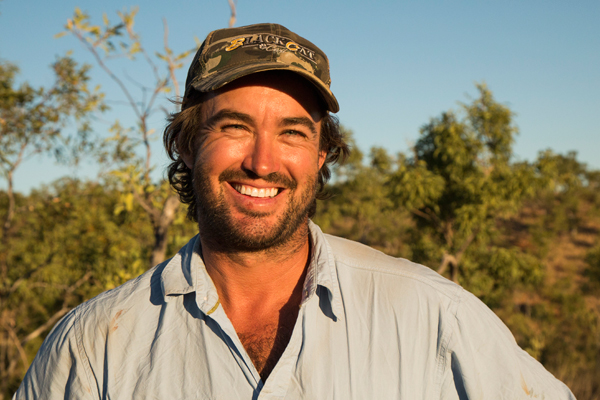 Q. How did you get into adventure travel?
A. It’s been in my blood since I was a kid – my family had a boat and every holiday we’d be up at a cattle station, camping out somewhere. Then when I was 22 I trained as a mustering pilot (rounding up cattle from a helicopter) and flew around Australia and Canada, so it’s stuck with me!

Q. How did you land a job as star of TV series Outback Wrangler?
A. One of my first jobs was catching crocodiles and harvesting their eggs up in the north. Then I started filming to show the folks back home what I was doing. I put it out to a few networks, and it eventually got picked up by National Geographic in 2011. Now we film once a year and it takes about six months per series – it’s great, and we get to show some of Australia’s prettiest places.

Q. What does your job involve?
A. I have a few different projects, all in the Northern Territory. One is Outback Floatplane Adventures, which Austravel and Travel 2 sell in the UK. The tours operate from a luxury camp in Darwin and we go out on floatplanes, helicopters and air-boats to visit the local crocodiles, usually in small groups of 9 to 12 people. It’s a once-in-a-lifetime experience – we go and feed the crocs and the group gets to experience things they never would anywhere else.

Q. What’s the most challenging part when you’re leading tours?
A. It’s making sure the group’s safe and that they take their time, because there’s so much to see – there are crocodiles, buffalo, wallabies, wild boar and choppers and boats.

Q. What’s your favourite part of Australia?
A. I live and breathe Australia every day, and there are so many different areas it’s hard to say. You’ve got Tasmania in the south which is great for wildlife, Rottnest Island on the west coast where there are quokkas, then the floodplains, the desert, the Great Barrier Reef… There’s so much.

Q. What’s been your scariest moment?
A. I’ve had a few. One time when I was collecting eggs I ended up waist-deep in the water fighting a pretty large female crocodile and I was thinking I’ve got this croc and it’s fine, but what if there’s a massive one right behind me? That put the wind up me a bit, but I managed to get out of the tussle with her in the end. But I’ve never been bitten. If I get bitten it probably means I’m not very good at my job…

Top travel moment?
Surfing on the east coast of Mexico – it was so laid back.

Number of countries visited?
About 15.