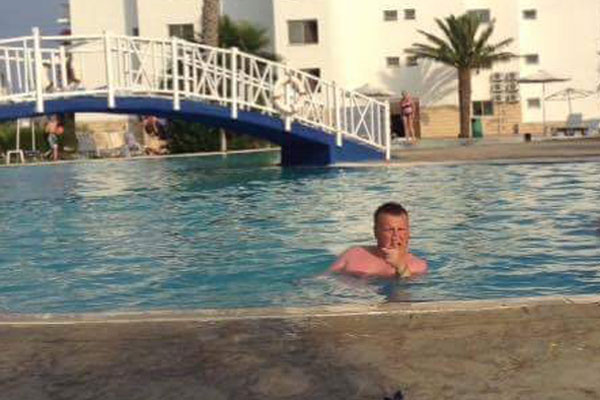 A holiday sickness fraudster was found to have been fundamentally dishonest after his ex-girlfriend shared a video of him dancing to Gangnam Style when he was supposedly ill.

Liam Royle, 23, of Eccles, Manchester, has been ordered to pay Jet2holidays more than £6,000 in costs.

He had claimed he suffered for five days with stomach cramps, diarrhoea and vomiting as a result of food poisoning on a week-long holiday at the Papantonia Hotel Apartments in Cyprus in August 2015.

But his ex-girlfriend who had joined him on the holiday supplied Jet2holidays with video footage of his dance moves, to the popular hit and viral sensation by South Korean artist Psy. Royle can be seen on the right hand side of the video (below).

After the evidence was shared at Manchester’s Civil Justice Centre, District Judge Iyer, ordered Royle to pay the costs to the tour operator.

The court heard that his ex-partner, who has not been named, described his claim as ‘astounding’ and ‘wrong’.

She provided Jet2holidays with a dossier of information, including the video of him dancing to Gangnam Style by the hotel pool on one of the days he said he was unwell.

It also included photographs taken on the holiday showing Mr Royle swimming in the pool, enjoying the evening entertainment and evidence that he took a 15-minute taxi to party resort Ayia Napa, where he ate a McDonalds meal.

The dossier also proved Royle did not skip meals, that he drank beer and cocktails and showed him describing the holiday as ‘fabulous’.

Royle had claimed he suffered from ‘personal injury’ and a ‘loss of enjoyment’ on his holiday, including ‘missing meals, excursions, swimming time and other general activities’.

When giving his judgment, District Judge Iyer said: “Even applying the most rigorous test, I cannot avoid the finding that there has been dishonesty in his claim of sickness. A statement of truth was signed by Mr Royle knowing that it contained fundamental lies, and he gave incorrect information to his medical expert, and as a result a claim was issued.”

After the hearing, Steve Heapy, chief executive of Jet2.com and Jet2holidays said: “We have worked very hard to tackle the problem of false sickness claims and to protect holidaymakers against the risks of getting involved in such dishonest activity, but unfortunately there is a minority who think that they can get away with it.

“This judgment shows that there are very real consequences to making false sickness claims, and Mr Royle must now pay the price. We would like to thank Mr Royle’s ex-girlfriend for her honesty, and although this is an unusual case, anyone making a fake sickness claim should be fully aware that we will robustly investigate and defend any claims that are dishonest or illegitimate.”

Simon Hammond, a partner from BLM, who conducted this litigation, added: “This just goes to show the courts will not stand for individuals seeking to try and mislead them for financial gain and will punish those appropriately who do so.”

Jet2holidays is among the tour operators to sign up to support Travel Weekly’s Fight Fake Claims campaign, launched last year after Abta found a 500% rise in holiday sickness claims. The industry put this down to a number of unscrupulous claims management companies encouraging holidaymakers to make false or exaggerated claims of gastroenteritis.

In April this year, the Ministry of Justice announced the extension of Fixed Recoverable Costs to cover holiday sickness claims brought under the Package Travel Regulations, making defence costs predictable, with the aim of deterring bogus claims.

The government also followed this up by clamping down on the practice of cold calling without consent, and further proposals are being put forward by the Financial Conduct Authority when they take over regulation of Claims Management Companies (CMCs) from April 2019 to ensure there is an end to misleading practices and dishonest activity.

Abta chief executive Mark Tanzer said: “Unsubstantiated holiday sickness claims cost the travel industry in the UK and our overseas partners tens of millions of pounds, as well doing great harm to the reputation of all British holidaymakers. Judges take a very dim view of claimants pursuing fake sickness claims and Mr Royle is just the latest to receive a hefty fine, others have even gone to jail.

“The vast majority of holidaymakers are disgusted by this dishonest practice, and cases such as Mr Royle’s send the message loud and clear to anyone tempted to pursue a fake sickness claim, that it simply isn’t worth the risk.”