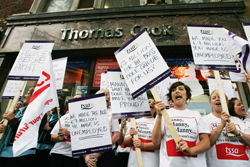 Thomas Cook employees in Ireland have staged demonstrations ahead of the proposed closure of three retail shops in Dublin.

The operator is in talks with staff over closing two Thomas Cook stores and a Direct Holidays store in the city, which could result in 77 redundancies.

Staff, along with friends and family, gathered outside the flagship shop on Grafton Street, Dublin, last week, calling for Thomas Cook to rethink its proposal to pull out of the Republic.

In a separate protest, staff travelled to Northampton to demonstrate outside the church that Thomas Cook chief executive Manny Fontenla-Novoa attends.

Travel union the TSSA had proposed an alternative plan to the operator, which involves keeping a retail presence in Dublin and making 30 redundancies. A meeting was set to take place in London yesterday between the union and Thomas Cook to discuss the future of the shops.

TSSA representative Antoinette Shevlin said: “Employees are angry, not just about losing their jobs, but about the decision not to have a Thomas Cook store in Ireland. They have many loyal customers who will be disappointed.”

A Thomas Cook spokesperson said: “We have not taken the decision lightly to enter into consultation regarding the proposal to close two Thomas Cook stores and the Direct Holidays store in Dublin.

“Separate talks with the TSSA and staff representatives of all those affected are ongoing, and we will continue to consider constructive proposals, and discuss issues raised, through these forums.”

Thomas Cook announced the proposed closures in May, citing “dramatic changes” in the Irish travel market and customers’ booking habits.