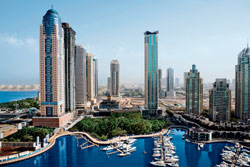 The DTCM said the visitor number growth was down to a number of promotional and marketing programmes including the Kids Go Free summer promotion which ends on September 20 and working closely with the trade.