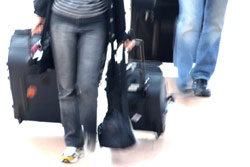 Concerns that strike action and eco-protestors could ruin the bank holiday getaway of 1.9 million Brits taking an overseas break have been averted.

Workers of ground-handling agent Swissport, who are represented by union Unite, voted at the end of last week to hold industrial action at Gatwick, Manchester and Stansted from August 27 to August 29, following a pay dispute.

However, a Gatwick spokesman said following Unite’s decision to postpone the action indefinitely, the 245,000 Brits expected to depart via the airport this weekend will be unaffected, adding: “It should all be tickety-boo.”

A Manchester airport spokeswoman said any potential strike action would be limited to about 300 airport workers out of a total of 20,000, leaving the 145,000 customers expected to use the airport unaffected.

She added: “We are working closely with the companies involved to ensure that they have the staffing capacity to handle the situation should any strike action go ahead.”

Meanwhile a Swissport spokesman said the company was not expecting industrial action at Stansted where 147,450 passengers are expected to jet off.

A Heathrow spokeswoman added plans have also been drawn up to deal with any problems caused by green protestors who have set up this year’s Climate Camp in Blackheath Common, London, ensuring minimal disruption for the 420,000 Brits expected to fly abroad from the airport.

Elsewhere about 120,000 people are expected to fly out of Edinburgh, Glasgow and Aberdeen airports

Eurostar expects 70,000 Brits to use the service this weekend. It will also carry its 100 millionth passenger since the service was launched in 1994. A further 500,000 Brits are expected to venture overseas using ferries or the Eurotunnel.

Popular overseas destinations include the Balearic Islands, Spain, Turkey, Portugal and the Greek Islands. The south coast, Devon and Cornwall are proving popular with holidaymakers staying in the UK.

ABTA chairman John McEwan said sales for the bank holiday had been driven by the late market, adding: “Many families see the bank holiday as their last ditch attempt to have a holiday abroad and get some guaranteed sunshine.

“This is more true this year than ever. Obviously people have been holding onto their money until they are sure they have enough to go away with, and as a result, we have seen a surge in late bookings.”