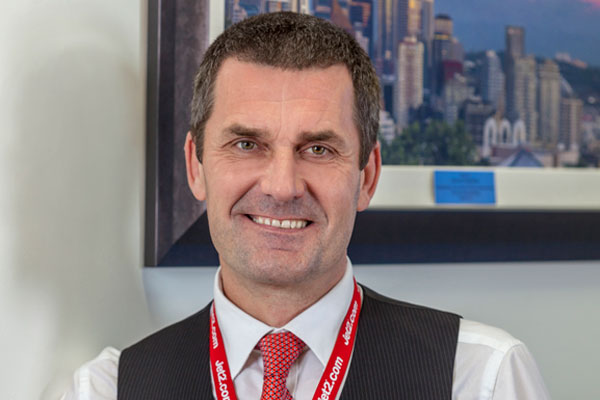 As I start to interview Jet2holidays’ chief executive Steve Heapy, we are unexpectedly joined by hotelier Bruno Correa, director general of the Paradise Park in Tenerife.

He tells me that he signed the first deal with Heapy when the latter joined the operator in 2009. The airline had started its tour operating arm two years earlier and Heapy’s arrival marked the start of its rapid growth.

Without even prompting him, Correa tells me that Jet2holidays is one of his most loyal partners, which pays early, gives guarantees without asking for exclusivity in the UK market and allows him to run his hotel his own way.

“Steve just says you run your hotel as best you can. If it’s right for Jet2holidays customers, then that’s great. If it isn’t, we won’t send them. They have been coming back for nine years,” he says.

It’s clearly a very long and solid relationship, built on respect and trust, and one of the reasons why Heapy says he will not be following Tui and Thomas Cook’s strategy by owning and running his own hotels.

Own-brand hotels are not on Heapy’s wish list. “We think we are good at running an airline and a tour operation. We don’t want to get into anything else. I would rather leave that to the experts,” he says, pointing out that Jet2.com was named Best UK Airline this year, as well as the seventh best airline in the world in TripAdvisor’s Travellers’ Choice Awards.

Heapy says his strategy means Jet2holidays offers “a huge range of hotels” for customers to choose from, so it can “let the customers decide” which they prefer.

Jet2holidays will also “stick to its onions” with regards to distribution, Heapy adds. “We want to create and maintain cast-iron relationships with independent travel agents. I don’t want to be conflicted and start competing against a main source of our bookings,” he says.

“We made a pledge that independent agents on the high street will be our channel for distribution, so we want to protect and nurture that. We think we have a successful formula for giving high-quality, great-value holidays to our customers. We are not giving them a reason to look somewhere else – and that’s good news for independent agents.”

Heapy admits it’s a “simple” and “straightforward” strategy, but one that saw the group continue to grow in 2018, despite challenges surrounding the World Cup and summer heatwave. It recently posted year-end results of £2.4 billion in turnover, up 38% on last year, with corresponding profits up 13% to £114 million.

“We are a financially robust company – you have seen our accounts. Compare them with our competitors and you will see we are in a strong position,” he confidently adds. “But we also offer award-winning customer service and are always improving it – you have to. We think we have the right strategy of providing great customer service for people. If you do that, they come back.

“So, while other operators are cutting costs and reducing the amount of customer service they provide [reducing the number of reps in resort and marketing], we are going to carry on.”

Asked how Jet2holidays was so financially sound and could continue investing and delivering profits when others were struggling and cutting back, Heapy says that “we perhaps don’t have the historical structural costs that other businesses have”, referring to large UK retail networks.

He also points out that his business was based equally on two markets – 50% seat-only and 50% holidays. “Half of all the people now flying on a Jet2.com aircraft are Jet2holidays’ customers and that split makes the business very strong,” he says.

Heapy reveals that Jet2.com now has 102 aircraft, with the last of a recent order of 34 due for delivery in January. This, he says, makes Jet2’s fleet 50% bigger than Tui’s, which has 67 aircraft, and twice the size of Thomas Cook’s, which has 46.

And Heapy reveals: “We are in the process of buying some more, which will allow us to put extra routes on sale.”

He says Jet2holidays’ frequency of flying, allowing customers to book any duration, was another key to the company’s success, and a “big advantage” in the market.

Heapy says the fact that traditional tour operators could not offer such frequency of flying would leave them more vulnerable to the launch of easyJet Holidays.

“We believe in competition. It lowers prices for consumers and increases quality,” he adds.

Asked how he felt about head of digital James Hardy leaving to join easyJet Holidays, Heapy says: “There is a vibrant and lively job market, so people can move between good roles. We have already started recruiting for
his replacement.”

Heapy confirms Jet2holidays had put more capacity into key destinations this year – with more flights on 12 of its 14 Spanish routes, to Greece and Cyprus, and a 100% increase in capacity to Turkey. “Where others have taken capacity out of Spain, we have remained loyal and added to it. Think Spain, think Jet2holidays,” he says.

Heapy adds that Jet2.com had no plans to expand into long-haul “at the moment”. “We don’t have the right aircraft for it and we still feel there is lots more opportunity in short-haul,” he says, pointing out that Jet2holidays had added three new destinations for summer 2019 (Burgas in Bulgaria, Izmir in Turkey and Chania in Crete), demand for which, he says, had
so far been “very strong”.

“We are 100% focused on providing great-value package holidays to the Med, Canaries and European leisure cities,” he says, noting Jet2holidays was now the UK’s biggest city break operator.

“We have launched new routes for 2019 and will be evaluating opportunities to launch to other new destinations, so if there are cities you would like us to fly to, then please let us know,” Heapy told delegates at the recent Jet2holidays VIP Agents’ Conference.

He also revealed that Jet2holidays was in talks with more villa companies to grow its villa programme and says its luxury brand Indulgent Escapes had real potential to grow through the trade.

“We sell only five-star. Some of our competitors have moved into four-star but we will sell only the best hotels in this programme. We have about 100 hotels  and every month we look at the scores – anything that doesn’t rank highly is dropped. We think there is huge opportunity for this. There are a lot of people who want to book a more luxury product.”

He adds: “We want you to make more money. We love working with independent agents. The purpose of bringing 270 of you to our conference is to work out how we can grow our business with you and how you can make more money.”

Jet2holidays VIP conference: Boss calls for action to save the high street