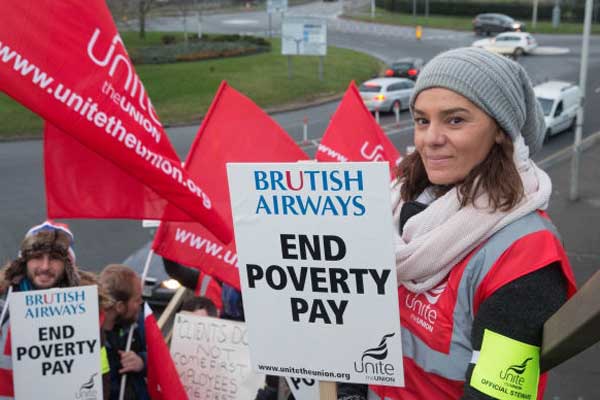 Pilots’ union Balpa, Unite and GMB said it was “long overdue” that staff who make the carrier a success share in it.

The unions described negotiations with the carrier as being at a “critical stage if an industrial dispute is to be avoided”.

BA, which marks its 100thanniversary this year, has offered a one-year inflationary increase, which unions say leaves staff with no increase in real terms.

All of the airline’s 25,000-strong union membership are being balloted on this offer and all three unions have strongly recommended rejection.

They are calling for an improved three-year deal with enhanced profit-sharing and the re-introduction of an employee share ownership scheme.

The three unions said in a joint statement: “BA is quite rightly celebrating an historic birthday and has just announced another record-breaking set of financial results.

“By ensuring that service to its customers remained world class – despite difficult changes, pay cuts and sacrifices made in the aftermath of the global financial crisis, including the voluntary closure of their final salary pension scheme – BA staff made these exceptional results possible.

“Cabin crew, pilots, engineers, terminal workers, office staff and managers are the backbone of BA’s powerful premium brand. In the bad times they have given.

“Now that times are good, that loyalty needs to be repaid. A woefully inadequate pay offer is simply an insult to that sacrifice.

“British Airways is now in danger of losing the support of its own staff support and damaging its brand in this important centenary year.

“BA must end its austerity approach to pay negotiations, re-connect with its employees and deliver a pay deal that properly reflects its record-breaking profits.”