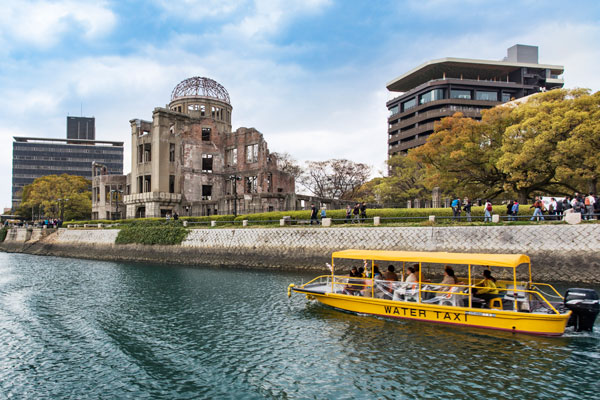 Natalie Marsh finds the southern cities are an ideal counterpoint to the country’s well-trodden tourist trail.

I’m staring up at what’s left of the Red Cross Hospital building in Hiroshima. On one side of the damaged structure, sturdy metal beams are bent inwards, while on the adjacent side, they’re bent outwards, driven in opposite directions by the incredible force of the shockwaves from the atomic bomb that was dropped here in 1945.

It’s a stark and humbling reminder of the atrocities that struck the city. Part of the building’s original wall is also on display, with shards of all sizes chipped out of the concrete – a result of broken glass from the explosion hitting it at speed. This is one of the few remaining structures in the centre that withstood the atomic bomb.

It’s a key part of Japan’s history, and one that is available only to those who go beyond the classic Golden Route. With Japan in the spotlight thanks to this autumn’s Rugby World Cup and next year’s Tokyo Olympics, efforts to disperse tourists to less-visited areas of the country are well under way, and the southern cities of Hiroshima and Onomichi are an ideal counterpoint to the well-trodden tourist trail.

Hiroshima is steeped in history. Destroyed by the atomic bomb, the city had to be rebuilt. Today, it’s a buzzing metropolis, with some fascinating attractions, unique neighbourhoods and a bustling nightlife scene.

Dubbed the ‘city of water’, Hiroshima is separated by six rivers flowing through the centre, while its backdrop is dominated by dramatic mountains as far as the eye can see.

At its heart lies Hiroshima Peace Memorial Park, the home of the former Industrial Promotion Hall (now known as the A-Bomb Dome), a museum and other monuments built to commemorate the victims. The park is remarkably serene and a tranquil place of respite among urban surroundings.

Visitors to the park pay their tributes at the Memorial Cenotaph, through which you can see the peace flame and A-Bomb Dome aligned. The flame will be extinguished only when there are no more nuclear weapons in the world.

The Hiroshima Peace Memorial Museum is a must-see, having reopened in April after extensive renovations. The museum walks visitors through what happened the day the bomb was dropped, and displays victims’ belongings, photos and more. Entry is about £1.50.

With so much to see in the park, hopping on board an e-bike was an easy way for us to get around it, and the rest of the city. Visitors can rent Peacecle bikes from terminals across the park for about £11 a day.

Our first introduction to Japanese cuisine came in the form of okonomiyaki – a savoury pancake-style dish mixed with noodles and vegetables, meat or seafood. It’s a hearty meal and there are lots of okonomiyaki eateries across the city.

More delicious food can be found in Yokogawa. A 10-minute streetcar ride from the Peace Memorial Park, this neighbourhood is full of restaurants, bars and shops. Sitting cross-legged on the floor of the Ekimae Sakaba Akamaru restaurant, among the locals, sampling a meat and veg hotpot with a pint of local beer, was the perfect end to the day. 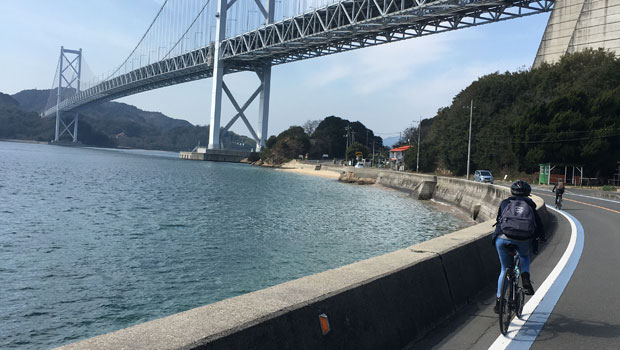 I wouldn’t call myself an avid cyclist, but with views as impressive as those along the Shimanami Kaido, I didn’t ever want to get off my bike. The Shimanami Kaido is a 37-mile cycle highway, which starts in Onomichi and crosses six islands over the Seto Inland Sea. Just over an hour east of Hiroshima by train, Onomichi is a quaint coastal town, and the cycling route is one of its main draws.

I was in awe of the scenery all around us. The dazzling sea stretched as far as the eye could see, with vast hills and tiny islands dotted across the horizon. While a nine-mile route sounded daunting, it didn’t take long for us to find our rhythm.

We crossed a bridge between islands, taking in incredible panoramas on both sides, stopped at a stall selling some of the freshest oranges I’ve ever tasted, and on our return to Onomichi, whizzed through quiet neighbourhoods past gardens ornately decorated with bonsai trees. There is so much to see along the Shimanami Kaido, and with passenger boats to and from Onomichi, less-experienced cyclists can tackle as much or as little of the route as they like.

Back on land, we jumped on board the Ropeway to reach the Senkoji Temple, which dates from the ninth century. The car carried us slowly upwards along more than 1,000 feet of cable, almost grazing the treetops and drifting peacefully over the houses below. Hills dotted the landscape behind us, and the town and the islands were scattered across the sea below. The temple atop the hill sits in the beautiful Senkoji Park, with an observation deck where I could have spent all day taking in the view.

For authentic Japanese souvenirs and gifts, Onomichi is worth exploring. There is a huge variety of boutiques and shops, including one stacked with different styles of Japanese swords. Back outside, we stopped by a stall to sample some delicious artisanal coffee.

Strolling along the street, vanilla-flavoured pancake in hand, I couldn’t think of a better place to experience real Japanese life.

Japan’s first purpose-built hotel for cyclists, Hotel Cycle is ideal for visitors wanting to explore the area on two wheels. Set right by the start of the Shimanami Kaido cycle route, the quirky hotel sits inside a converted warehouse.

Each of the spacious rooms comes with a set of locally made pyjamas. The owners wanted to create the feeling of a small town, with the hotel, a bakery, shop and cafe all under one roof. Cycle hire is available from the on-site Giant Store Onomichi. Deluxe rooms start at about £110 per night.

The price is based on two sharing and includes accommodation in a ryokan, two days’ bike rental, a Hiroshima cycling tour and transfers (available from November and bookable as an extension to a Tokyo or Kyoto trip).