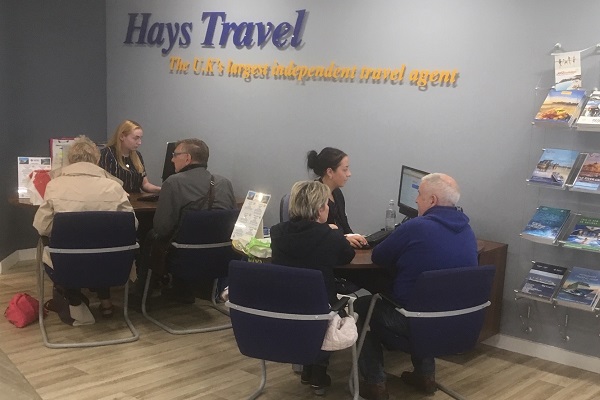 Agencies up and down the UK bounced into action on Monday to help re-book customers due to travel with Thomas Cook – which collapsed in the early hours.

Staff who were due to be off work came in to help deal with queues of customers which stretched out of the doors of some agencies, with agents coming in early in anticipation of a hectic day.

As media speculation grew over the weekend about the failure of Cook, which is reported to have affected around one million holidays, agencies began to put contingency plans in place.

Worried Thomas Cook holidaymakers were queuing outside Tailor Made Travel stores before the shops, which had drafted in all available staff, had opened their doors on Monday morning.

The agency, which has 18 travel agencies in Wales, said it was dealing with thousands of enquiries from customers due to travel in the coming days and that Cook was its second largest supplier.

Comment: Industry must demonstrate it can be trusted in wake of Thomas Cook collapse

Helen Tustin, chief operating officer, said: “We have had procedures in place in case this happened and any staff available to work have come in. We have been up since 3am working on bookings for our clients.

“People going in the next few days are the priority, but we have to help any client that comes in. In towns where there is a Thomas Cook, and we also have an agency, customers are coming to us instead. We are trying to rebook clients to other operators.”

Thomas Cook bookings accounted for 25% of business at 36-branch Hays Travel North West, which called in staff on days off on Monday to handle the fallout across its retail network.

“We’ve had shops full of people with queues right out the door,” said managing director Don Bircham. “It’s been absolutely manic. With the volumes we have been booking today, we’ve had systems going down, including Tui’s, and our telephone staff have been struggling to keep up. We’ve had customers waiting two hours and then trying to find alternatives for two hours. They might not be getting their exact price, or destination, but they’re delighted for the help.”

Bircham took sandwiches and water to staff in a cluster of north Wales shops. “Our staff have been wonderful,” he added. “The challenge has been for senior management to keep them up to date with developments.

“If customers booked Thomas Cook through us there is someone there for them. And we’re happy to help anyone who booked in a Thomas Cook shop”.

Miles Morgan Travel had hundreds of clients in resort on Thomas Cook holidays. Morgan, who was personally ringing clients after Cook’s failure, said: “Everyone knows someone at Thomas Cook which shows the scale of the business. I think it causes short term trauma because there is so much to sort out.

“I have been calling clients in resort. Most people were on standard packages so there is a tried and tested formula with the CAA, the difference here is the scale.

“A lot of our staff used to work for Thomas Cook so there is a lot of sentiment among our team and are still very attached to the brand.”

Premier Travel, which has 21 shops in the East of England, set up an emergency helpline and put backup plans in place as early as Friday to prepare.

Director Paul Waters said 500 customers were affected, including 50 forward bookings in the next week 100 on holiday. “We’ve dealt with a number of customer bookings with Thomas Cook and we are helping people where they have not booked with Premier,” said Waters. “We have been working over the weekend on this so we’re well prepared. It’s a time in the industry where everyone is pulling together during a difficult situation.”

Steve Witt, co-founder of homeworking firm Not Just Travel said: “We are getting lots of calls and emails from non-Not Just Travel customers looking for help because they booked direct and there is no-one to help them. We are helping them all.”

Consortium the Advantage Travel Partnership set its 24/7 Operator Failure Plan into action to support its more than 650 agency members.

Alongside the phones assistance, a dedicated page was formed on its extranet which agents can check for updates while in-house tour operation Advantage Holidays is assisting members with rebooking with other suppliers.

Chief executive Julia Lo Bue-Said said: “Our focus is now solely on supporting our members to ensure that their customers return home and those that have booked holidays are still able to enjoy their much-anticipated break. We encourage any member who has a question to contact us via the dedicated hotline.”

The Travel Network Group also opened a support line for its agency members, and called in its team over the weekend in preparation.

Chief executive Gary Lewis said: “It is now the role of our membership to serve those customers that are due to travel and I know that they will do an equally amazing job of managing that as sensitively and professionally as they can.”

Abta, meanwhile, created a microsite on its website for members and their customers giving advice about what to do next.