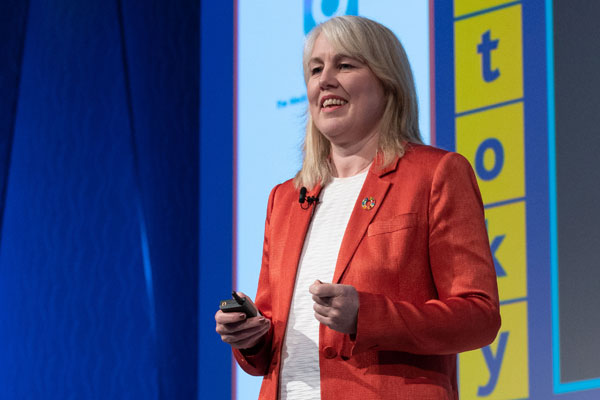 Travel businesses and consumers must look at what they can do now and not focus on future technologies to save the environment.

She showed delegates a picture of the globe heating up over the decades, showing 2012-2016 having barely any blue left.

Walker also said it was “probably too late now for the Great Barrier Reef”.

Turning to the industry’s efforts in addressing its impact on the environment, she praised KLM’s ‘Fly Responsibly’ campaign which encourages travellers and the aviation industry to share responsibility for minimising the impact of flying.

“Everybody has a role and we’re all in this together,” she told delegates at Abta’s Travel Convention in Tokyo.

Walker also praised easyJet’s plan for pledging to fly electric aircraft by 2027, but said she was “not convinced” by some of the futuristic and carbon-free planes being designed for long-haul travel.

“Biofuels promise much but can’t provide the whole answer,” she added.

“There are potential solutions coming along but it’s important to look at the whole picture and what we can do now.”

Walker said airlines were responsible for more than 10,000 tonnes of CO2.

During his opening address, Abta chief executive Mark Tanzer said the industry has been working for a long time to “improve travel’s social and environmental footprint”.

However, he said the challenge was growing particularly in respect of carbon and fossil fuels.

“The long term health of our industry will depend on how we manage the carbon challenge,” Tanzer told delegates.

“The government goal of achieving net-zero carbon emissions in the UK by 2050 is a serious and laudable commitment, and we have to play our part in meeting it.”

He added: “We need to find the middle ground where customers can continue to travel without shame and the industry can be confident we are doing good.

“The government can help, not by adding extra taxes, but in reshaping the current tax system to encourage efficiency and directing funds to investment in technology.

“What can’t be reduced or eliminated should be offset, and we need reliable and recognised offset schemes to do that.”