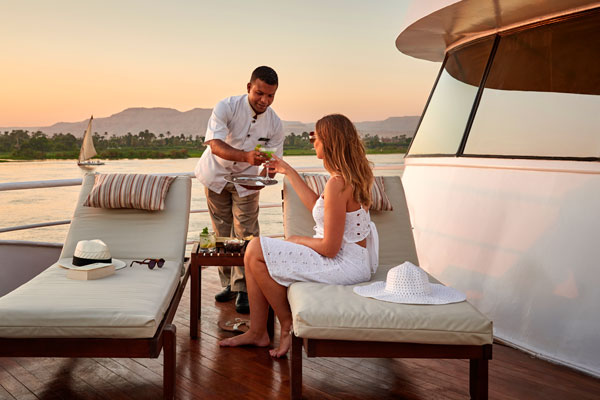 Egypt’s ancient waterway is back in vogue, finds Jane Archer on a Luxor-Aswan sailing.

“Yalla, yalla, Ramesses,” calls our guide, Medhat, hurrying us along as we race around Luxor Temple – a group of nine Nile newbies taking our first lesson in the lives and loves of the gods and pharaohs of ancient Egypt.

There’s a lot to see and Medhat is keen to show us it all, and where better to start than with the greatest of them all, Ramesses II? This ancient pharaoh is more than a little admired in Egypt because he was not only a prolific builder, especially when it came to giant statues of himself, but also found time to father more than 200 children with a variety of wives and lovers.

“He was very important so I am calling my group Ramesses because you are all VIPs,” Medhat announces as we drive to the temple from the Nile Adventurer, our home for the next four nights and one of four vessels Sanctuary Retreats operates on the Nile.

I doubt I look very VIP after a combination of late‑night and early-morning flights to get to Luxor from the UK, but the ship, which is fresh from a four-month refurbishment, certainly looks the part.

We’re sailing from Luxor to Aswan on a journey that will tick off the temples of Luxor, Karnak, Esna, Edfu, Kom Ombo and Philae, but still give us time to relax on the sun deck and watch the banks of the Nile go by.

Not that many other passengers are joining me there. I love the heat but Egypt’s early October weather is a bit steamy for most – an average of 39C by day and beautifully balmy after dark. Come the end of the month, things start to cool down and high season kicks in.

The Nile disappeared off the cruise radar after the Arab Spring in 2011 but holidaymakers are being tempted back by a combination of keen prices and upgraded products, and because the temples and tombs are such a bucket-list adventure. Sanctuary Retreats says it still has availability this winter but demand is high and some sailings are already full.

I am the only Brit on my cruise – most passengers are from the US – but there is growing demand from the UK, where the number of cruisers sailing the Nile grew from 4,700 in 2017 to 5,700 last year, according to Clia.

“It’s much busier than last year but we need more tourists,” Medhat tells me as we peek into one of the tombs in the Valley of the Kings, a highlight of our afternoon touring Luxor’s West Bank. All tours are included in the cost of the cruise, bar an optional trip to Abu Simbel.

Visitors are vital for the local economy, but from a selfish point of view I think it’s perfect that the ancient sites are not overcrowded. On the downside, we’re fair game for the hawkers, whose shops are piled high with sphinxes, scarabs, T-shirts and other Egyptian trinkets, and who respond to a firm “no thanks” with a hopeful “maybe later”.

Next morning, we round off the Luxor sightseeing with a trip to Karnak Temple, the grandest and most famous shrine in Egypt thanks to its starring role in Agatha Christie’s Death on the Nile, which they showed in the lounge after dinner that evening. Those familiar with the film will remember what happened in the columned hypostyle hall; for those who have never seen it, I’m not giving anything away. 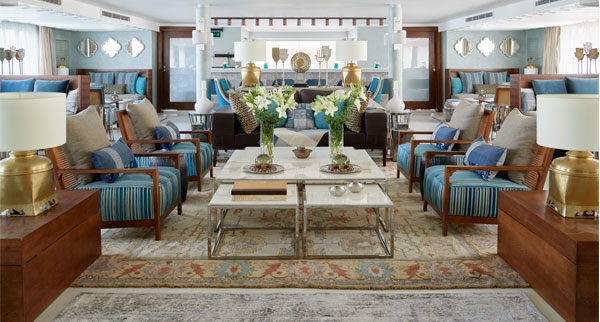 New on the Nile

• Discover Egypt’s new 11-night cruises between Luxor and Cairo let clients combine the sights of ancient Egypt with the new Grand Egyptian Museum, which opens near the Pyramids in late 2020. Prices from £2,319 per person including flights in September 2020.

• River lines Viking and Uniworld are launching new vessels – Viking Osiris and Sphinx respectively – on the Nile in 2020. AmaWaterways will follow suit in 2021.

• Agents have been advised to expect huge demand for Nile cruises as an exhibition of treasures from King Tutankhamun’s tomb, on show at London’s Saatchi Gallery from November 2 until May 3, 2020, revives interest in ancient Egypt.

As we start to sail south that afternoon, it’s eerily quiet but for the cries of kids on the riverbank trying to attract our attention. The scenery is beautiful: green along each riverside where the ground is well‑irrigated, but with miles of desert beyond.

Now and then I spy a tiny dahabiyya, modelled on the sailing boats the British first used when they came to Egypt, being tugged in the opposite direction.

Once lunch is over – always a buffet, as is breakfast, both offering Egyptian and international dishes, while dinner is a served four-course meal apart from one Egyptian-themed night – we enter the lock at Esna and dock just beyond for a tour of the hypostyle hall of the temple there, dedicated to the god Khnum.

I have already realised that getting to grips with who’s who in ancient Egyptian history is tricky, to say the least, especially as just when you think you’ve got it, along comes another god to confuse things.

“We think there are about 900 gods,” Medhat tells me the next day on a horse-and-carriage ride through Edfu to the next temple, where we spend 20 minutes learning about murder, magic and infidelity between the gods.

I’m not sure I’m any the wiser, so I make do with admiring the temple, which is dedicated to Horus, the falcon god, and has a perfumery room whose walls are adorned with ‘recipes’ – in hieroglyphics, of course. “Who knows, maybe Chanel No 5 is somewhere on these walls,” Medhat jokes. 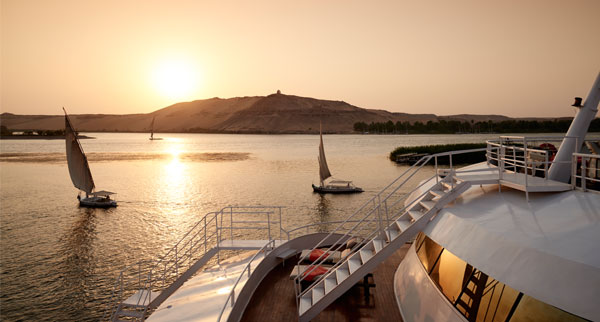 We sail on again, farther south, ticking off the Temple of Kom Ombo, half dedicated to Horus, half to a crocodile god – a prudent move by the ancients designed to appease the crocs that lived in the river in those days – and on to Aswan, where the cruise ends.

But not before one last temple. Philae had been built on an island by the ancient Egyptians but, due to being submerged every year beneath floodwaters, it was painstakingly moved more than 40 years ago under the direction of Unesco to its present location, also an island.

It is spectacular, surrounded by sandstone islands rising out of the blue water, with pockets of greenery here and there, and little boats taking visitors to the temple. I could have admired the scenery for hours, but we had one last treat that afternoon – a felucca cruise (think small boat with a sail) on the Nile.

It was gorgeous. We glided peacefully past the spectacular Old Cataract Hotel, where Agatha Christie wrote Death on the Nile, and the giant grey boulders that gave Elephantine Island its name. As the sun started to set, everything took on a warm glow. Our just reward from the pharaohs for at least trying to be good students? I like to think so. 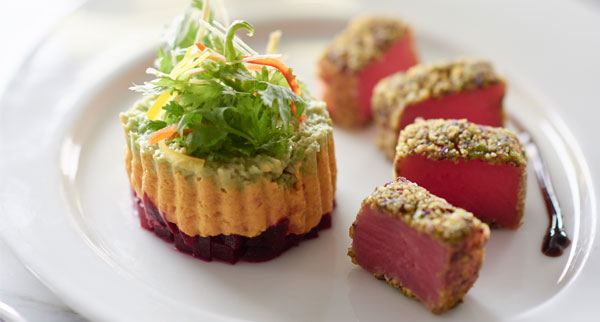 Sanctuary Nile Adventurer is looking fabulous after a four-month refurbishment this summer that upgraded all cabins and public areas, and gave the decor a distinct Egyptian flavour, with pastel colours, cushioned sofas and local fixtures and fittings.

The restaurant has been redesigned around a big new horseshoe-shaped servery, the massage room has replaced a small library and there is an outside ‘gym’ with an exercise bike and running machine.

In the cabins, the beds, furnishings, light fittings and TVs are new, and USB slots have been added by the desk and beds. Rooms are cosy but comfortable, and all have a river view. Two forward suites have private balconies, and spacious seating and sleeping areas.

Other facilities include an alfresco dining area and a beautiful sun deck with a small swimming pool and delightful four-poster cabanas. The lounge bar is a quiet place by day and used for evening entertainment – a movie, Egyptian party and whirling dervish show – after dinner.

Fred River Cruises offers a nine-day Discover the Nile holiday pairing a four-night cruise from Aswan to Luxor with four nights in Cairo, from £4,059 per person departing January 28, 2020, including flights. An optional Abu Simbel excursion costs from £299.
fredrivercruises.co.uk