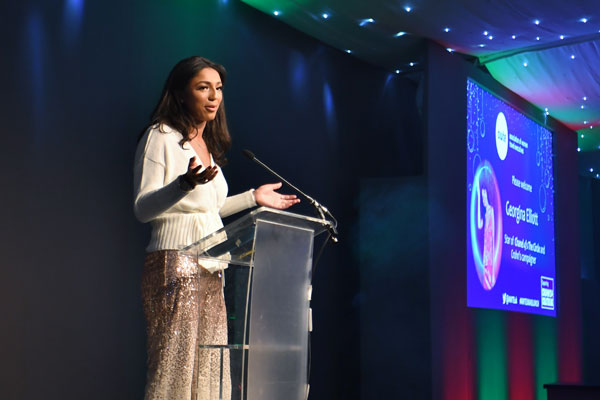 The Association of Women Travel Executives has raised more than £7,000 at its annual Christmas lunch for the charity Crohn’s & Colitis UK.

The association announced its new chosen charity for 2020 at the event, held at The Pavilion at The Tower Of London.

Crohn’s Disease is a condition that causes inflammation of the digestive system. There are 300,000 sufferers in the UK. It is incurable.

She said: “I was called Princess Poops a lot. I got called Moonface when I was on steroids. I am quite thick skinned but some people are not.

“It (Crohn’s) tears you from the inside out. It eats you alive.”

Elliott was diagnosed at the age of 17 and at one point was given 24 hours to live after contracting septicaemia in hospital.

She added: “I am 22 now but I can’t do things that my friends can do, like go to festivals.

“I just want there to be a cure. It’s really important to raise money but also awareness. People are not educated about it; we need to work together to spread awareness.”

Traveltek head of commercial Tracy Sharp has lived with Crohn’s for 30 years, and suggested the charity to AWTE.

She said the disease was particularly hard for teenagers who were bullied for having to go to the toilet regularly and often felt embarrassed by their condition.

A live auction and raffle was held at the Christmas lunch to raise money for the charity.