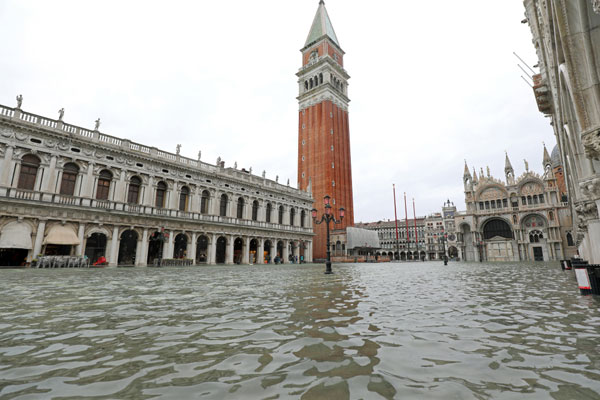 Tourists were seen carrying their suitcases aloft as they waded through high water in St Mark’s Square.

An “exceptional” tide peaked at 1.44m during the morning, according to The Times.

Hoteliers reported suffering 45% cancellations over the past month after devastating floods peaked at 1.87m on November 12, the highest level for more than half a century.

Vittorio Bonacini, head of the Association of Venetian Hoteliers, said there had been an “unprecedented drop” in bookings since last month.

“This did not even happen after the attacks on the Twin Towers,” he said. “The cancellations are continuing unabated for the first months of 2020. We recorded a peak of 45% cancellations and had to cancel events, conferences and major initiatives planned for next year.

“A striking figure is the one for new year’s eve. Last year hotels were fully booked. This year the figure is under 50%.”

The city’s tide monitoring centre has been on permanent alert since the record floods damaged homes, businesses and historic monuments.

The high-water mark had passed 80cm on 43 occasions since the November 12 ‘acqua alta,’ it said.

Bonacini insisted that the preparatory work by Venice residents meant that visitors were not exposed to danger or inconvenience by the floods.

Only 11.5 million people stayed for the night at a hotel in the centre.