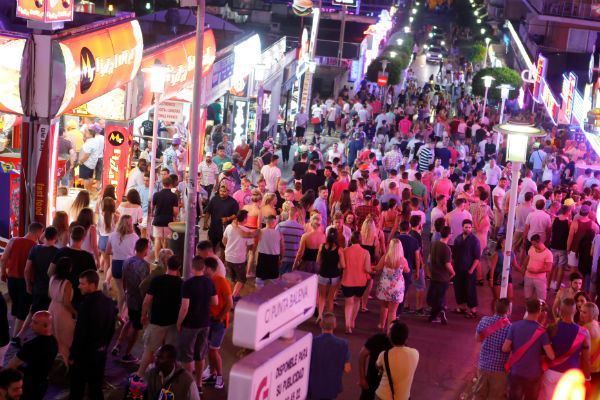 The Balearic Islands government has approved a new law which aims to crack down on excessive drinking in tourist hotspots.

Fines of up to €600,000 will be issued for serious offences which fall foul of the new rules that apply to the popular tourist areas of Playa de Palma, El Arenal, Magaluf and the west end of Sant Antoni de Portmany.

Organised pub crawls and any advertising that “encourages alcohol consumption” such as happy hours is not allowed and off-licences must close from 9.30pm to 8am.

So-called ‘party boats’ can no longer advertise or pick up and drop off tourists in the three designated areas.

A new ‘sanction regime’ will see very serious offences, which include the sale of alcoholic after hours, happy hours, 2-for-1 drinks offers and pub crawls  penalised with fines of between €60,000 to €600,000.

The government said the new laws aim to “create a more sustainable and respectful tourism model”, both in terms of “the environment, the quality of life for residents and the visitor experience”.

Last year Abta warned the Balearics authorities it could drive away UK families if it adopts a “misguided” proposal to restrict alcohol at all-inclusive hotels.

The laws are valid for five years.

Jumping off balconies is banned throughout the Balearic Islands and anyone caught doing so will be removed from their hotel or accommodation.

The government said the new rules will “respect the contracts already signed between tour operators and hoteliers to prevent any legal or contractual issues”.

“In recent times, efforts to positively promote the destination, create a better quality experience – via both public and private investments – and position the destination in an increasingly competitive and global market have been negatively impacted due to issues of unsociable behaviour often related to alcohol abuse in certain tourist areas of Mallorca and Ibiza,” the government said.

“With this new law defended and requested by institutions, social enterprises, businesses and employers, the government provides the necessary tools to combat the issue and reverse any negative impact.”