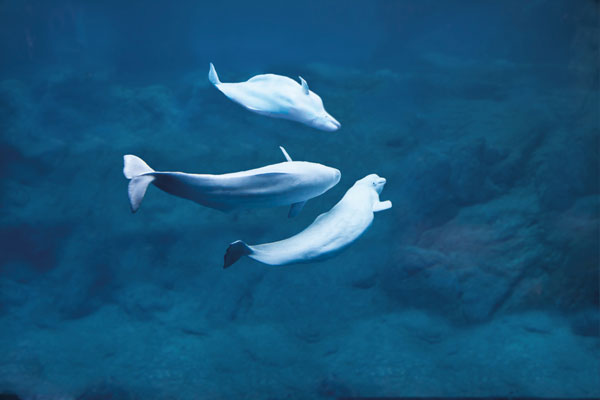 Summer is a magical time to explore the edges of the Canadian Arctic, finds Meera Dattani on a trip to Churchill, Manitoba.

In the summer, something incredible happens in the sub-Arctic town of Churchill: about 60,000 beluga whales flock to Hudson Bay to feed, mate and birth in its warm waters.

Kitted out in drysuits and full-face snorkels, three of us lie, top and tail, across a floating lilo, secured by a slow-moving Zodiac, our faces immersed in the icy water as we get our first taste of aqua-gliding.

“Beluga whales swim around us, their smooth bodies emerging occasionally above the water, dipping down gently, often with a baby to one side.”

Below the water’s surface, we’re transported to another world, one where ghostly, white beluga whales swim around us, some playful, some curious, coming up close to see what this new oddity is.

Churchill, in the far north of Canada’s Manitoba province, is better known for its polar bears – best seen in September and October, when the Arctic pack ice forms – and for seeing the northern lights. But summertime has its own appeal in this faraway town: beluga whales in abundance – about 3,000 in the Churchill river basin itself – Arctic terns on every rock and potential polar bear sightings as they edge towards the bay, in anticipation of the soon-to-form ice. 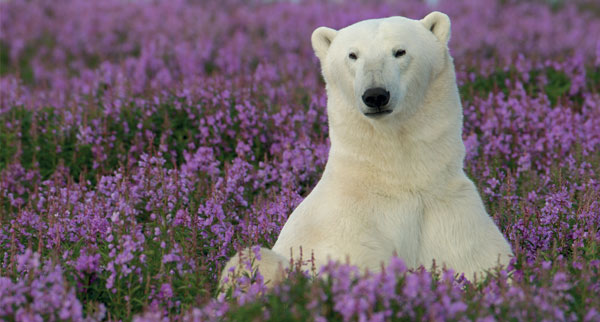 Back on the Zodiac, the belugas’ friendly nature is just as evident, or rather, audible. These seriously sociable ‘sea canaries’ are chatting away, clicking, whistling and clanging non-stop, while their five-inch-thick blubber keeps them warm.

They swim around us, their smooth bodies emerging occasionally above the water, dipping down gently, often with a baby to one side. “Listen to them sing,” says our guide, Jason Ransom from Lazy Bear Expeditions. We sit quietly, mesmerised by their display.

Later that week, we take kayaks on to the Hudson Bay. Almost level with the water, we’re practically beside the belugas as they swim up to the boat, the odd one playing with the rudder. But for those who prefer a little more distance, Zodiacs or excursions on larger vessels provide equally great sightings. 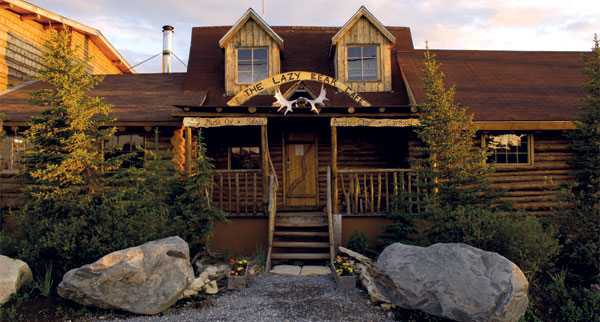 Wildlife is only half the story in the ‘polar bear capital of the world’. Thanks to its location on the Churchill River, which feeds into the Hudson Bay, Churchill was once at the heart of the fur trade, and in the 17th century, was the lucrative Hudson Bay Company’s first trading post. It was also a research station, rocket launch site, supply centre and military base during the Second World War and Cold War.

It’s hard to imagine now, but Churchill was once home to between 4,000 and 7,000 people – it even had a Ford car dealership. Now it has a population of 900, one supermarket (Northern Store) and a where-everybody-knows-your-name feel. In its compact streets with their low-rise buildings and smattering of hotels and lodges, (such as the family-run Lazy Bear Lodge, also the town’s best restaurant), there’s a surprising amount to see.

“Churchill was once at the heart of the fur trade, and in the 17th century, was the lucrative Hudson Bay Company’s first trading post.”

In recent years, Canadian authorities have made greater efforts to bring in indigenous (First Nations, Métis and Inuit) perspectives and history, as exemplified by Churchill’s Parks Canada Interpretation Centre, inside the railway station. Land grabbing and children forced into residential schools in an attempt to strip away indigenous culture are among the stories told, often by local indigenous (Inuit or Cree) people. Our guide, Florence Hamilton, is descended from the Sayisi Dene people that settled in this area. “All my stories are here in Churchill,” she tells us.

The centre also addresses climate change, and photos and videos depict Churchill in its heyday. 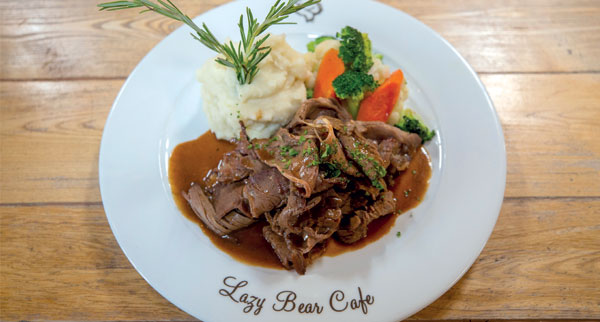 Churchill’s top pick is the Itsanitaq Museum (previously the Eskimo Museum), which is a brilliant place to learn about Inuit culture and the importance of caribou. Carvings of Inuit life, polar bear masks and whale horns keep me hooked for hours. It has an excellent gift shop too, although the best place in town for northern crafts is Arctic Trading Company, on Churchill’s ‘high street’.

Walking through Churchill is a treat. While the town may appear to be asleep, there’s plenty to see. Don’t miss the inuksuit (stone landmarks used by the Inuit to communicate messages) around town, the huge bright murals that address issues of sub-Arctic life, and the new Polar Bears International House visitor centre. Even the post office is an attraction, if you want a polar bear stamp in your passport.

“In peak polar bear season, visitors are wise to heed safety signs and not go walking where bears may wander.”

“It might sound weird, but the community centre is a good way to find out what living in Churchill means,” Jason tells us. He’s right. The centre is a social hub, library, hospital, theatre, gym, hockey arena, curling rink, pool, school, administrative centre and polar bear safety centre, all in one.

The polar bear ‘jail’ (officially the Polar Bear Holding Facility) is another example of how life here differs; polar bear patrols safely capture and release any bears found in town. In fact, local children who go trick-or-treating at Halloween will walk in a group, surrounded by a team. In peak polar bear season, visitors are wise to heed safety signs and not go walking where bears may wander. 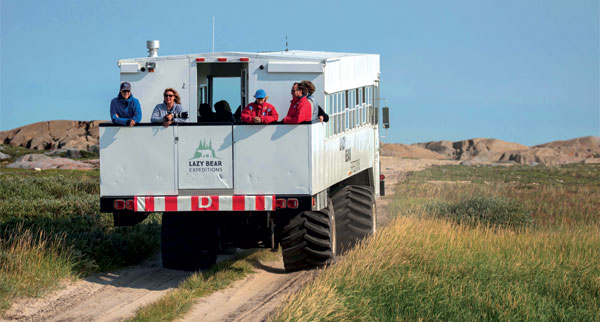 In the area around Churchill, clients can also go husky-sledding (dog mushing) in summer, and explore the tundra on specially designed tundra vehicles. Each company or lodge has its own trademarked brand; we’re on Lazy Bear’s Arctic Crawlers, giant caravan-esque vehicles with monster tyres, perfect for combing the now-green tundra and appreciating the remoteness and vastness of the Churchill Wildlife Management Area.

While everyone’s looking out for polar bears, it’s worth looking among the wildflowers for more likely summer sightings such as Arctic hares and foxes.

Churchill’s whimsical nature is nicely exemplified by Miss Piggy. When a freight plane crashed over town in 1979, it would have cost a lot to have removed the wreckage – so it remained in situ. Since then the wreck, known as Miss Piggy because its cargo was made up of pigs, has become a famous sight. 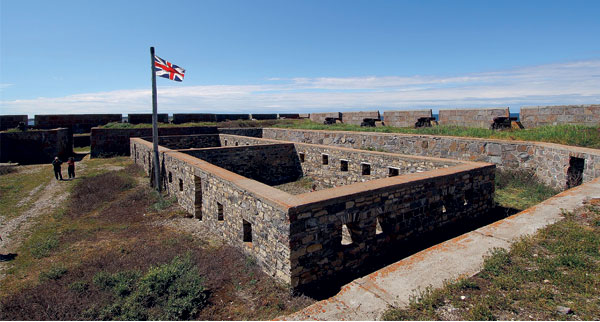 Worth a visit are the Northern Studies Centre field station, on the site of the former Churchill Rocket Research Range, and Fort Churchill at Cape Merry, for its spectacular bay views. Boat trips also visit the Prince of Wales Fort, built by the Hudson Bay Company in the 1700s, when the English and French were battling for the lucrative fur trade.

One evening, we sail into the bay on the lodge’s vessel, named after 18th-century explorer Sam Hearne. Beluga whales splash about below us while Arctic terns
fly above – it’s idyllic.

“Boat trips also visit the Prince of Wales Fort, built by the Hudson Bay Company in the 1700s.”

Then there’s a hushed, excited gasp. On the rocks is a mother polar bear with a cub. They seem unbothered or unaware of us, padding about the cliffs. For most of us, it’s our first polar bear sighting. We photograph and watch the pair for what feels like hours, before they head slowly out of sight.

Later, over a beer at the Tundra Inn, the town’s only standalone pub, we can’t stop talking about it. We saw the holy trinity of bears, belugas and birds – and summertime Churchill was the place. 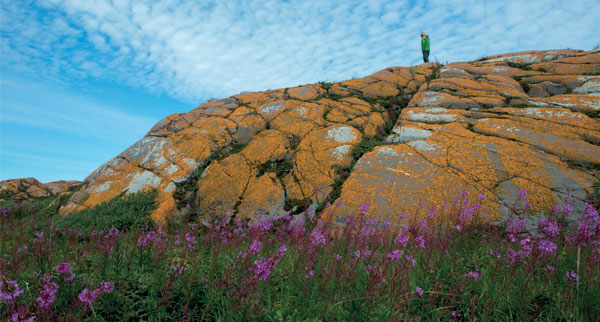 There are no roads into town, it’s air or train only. Most packages start and end with a night in Winnipeg, the capital of Manitoba (and worth a longer stay for its emerging art, food and culture scene), and include the two-hour flight to Churchill. Due to unpredictable weather, it’s wise to leave some buffer time before onward travel. For adventurous clients, consider the two-night Via Rail train journey to Churchill from Winnipeg or, depending on their itinerary, the shorter train ride (16 hours) or flight from Thompson.

The best things to see, do and eat in Vancouver, Canada
Where to go whale watching in Canada
Romantic Valentine’s breaks in Montreal, Canada