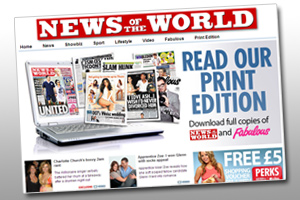 The Times has today claimed that the decision by advertisers, including some travel brands, to pull their support from its sister paper The News of the World was a key factor in the tabloid’s downfall.

Yesterday News International announced that the 166-year-old red top would publish for the final time this Sunday following a succession of damaging stories about phone hacking.

In its reporting today The Times said the ‘catastrophic collapse’ in advertising was prompted by a furious online campaign led by users of Twitter.

Some travel brands involved changed their position as the public outcry spread and further revelations emerged, with others biding their time before showing their hand.

Asked by Travel Weekly’s sister title Travolution on Tuesday morning for their views, both The Co-operative Group and Tui Travel, parent of First Choice and Thomson, said they would not be changing their advertising schedule.

The two other brands specifically targeted in the Twitter campaign easyJet and Butlins (owned by Bourne Leisure) did not comment immediately.

However, the tide started to change on Tuesday afternoon when Ford announced it was pulling advertising and other major backers including npower, Lloyds Banking Group, Asda and Boots said they were reviewing their position.

The Times today reports that the list of advertisers was first published online by influential website Mumsnet, which itself cut links with Sky, the broadcaster in the News Corp group. The list was used to encourage Twitter users to bombard brands with questions about their advertising.

Virgin Holidays was not among those targeted, however the tour operator prompted a succession of announcements from other travel brands when it announced it was withdrawing advertising.

By Wednesday the Co-op and Tui had issued statements reversing their original stance and Butlins said it too would be pulling advertising.

As far as Travel Weekly is aware easyJet did not update its original statement issued on Tuesday which said it was “monitoring the situation and awaiting the outcome of any investigation”.

In the end the decision to close the News of the World after this Sunday’s edition – which will include no advertising – means those advertisers who stuck by the publication will suffer minimal damage to their reputations.

In a comment on the week’s events, TWgroup editor-in-chief Lucy Huxley said:

“Online social media platforms such as Twitter are providing an increasingly powerful stage for users to campaign on certain issues that gain momentum and influence in a way they would never have done in the past.

“You might think it’s a stretch to expect advertisers in a particular publication to be responsible for how its employees behave. But this episode is a reminder of a changing world in which all organisations are under increasing pressure to be more responsible about how they operate.”