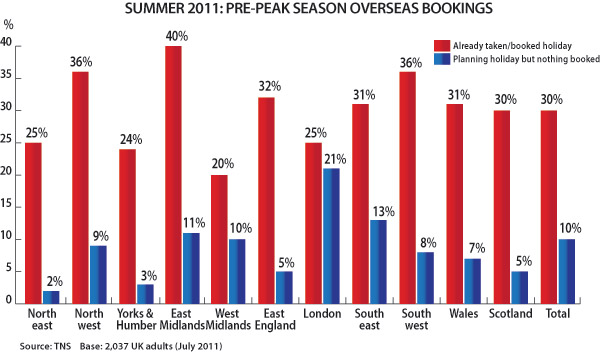 One in 10 UK adults planning an overseas holiday this summer had not booked going into peak season and one in five in London were seeking a late deal, according to exclusive research for Travel Weekly.

The study suggests a heightened degree of uncertainty in the lates market, after analyst GfK Ascent reported late-season sales down year on year.

Research firm TNS found 10% of a group of more than 2,000 adults were still planning a summer break in late July, compared with 30% who had booked or already taken an overseas holiday.

The figure undecided about this summer was down from 20% in May. However, the proportion opting for a UK domestic break was up from 10% to 14%.

There were strong regional variations in the latest survey, with 21% in London yet to book compared with 2% in the northeast, 3% in Yorkshire and Humberside and 5% in Scotland and eastern England.

Young adults and those in lower income groups were most likely to be seeking a late deal, with over-55s and better-off households the least likely.

There appeared little variation in behaviour between families and those with no children. However, households with older children were more likely to have booked already.

GfK Ascent reported a shortfall of 6% in package bookings in the week to August 20 and 4% the previous week. However, season-to-date bookings for the summer remained just 1% down year on year going into last week.