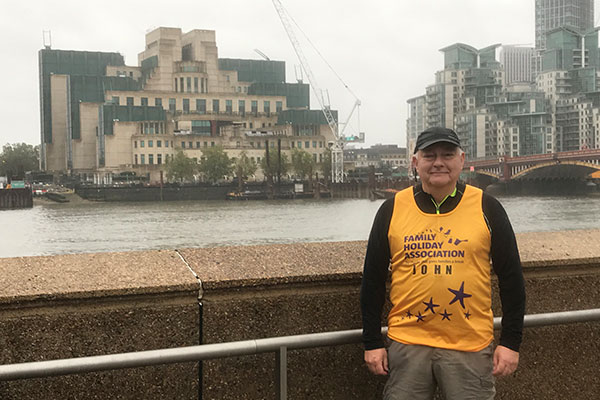 Abta’s director of membership and financial services John de Vial is in a final charity push after raising more than £17,000 so far at this year’s London Marathon.

De Vial walked from Abta’s London Bridge offices to Kew Bridge along the Thames to take part in this year’s virtual Virgin Money London Marathon, a round trip of 31 miles and five miles further than the marathon’s usual length.

He is hoping to continue collecting donations in order to reach this year’s target of at least £20,000 for the Family Holiday Association’s Give Them A Break campaign.

Once raised, de Vial will have collected £100,000 for the FHA in total over the last seven years. He has collected £80,000 in fundraising for the charity in the previous six London Marathons.

De Vial thanked everyone who had sponsored him so far and said he would be leaving his fundraising page open for the rest of 2020 in a bid to reach his target “in these difficult times”.

If he can achieve more in fundraising and reach £21,625, that will enable the FHA’s Give Them A Break campaign to hit its own £25,000 target.

De Vial admitted it was a “very wet and very strange London Marathon” this year, in which he passed many other walkers and runners but with “no idea what they had set as their own challenge or where they were along their journey.”

He added: “The first half was really tough with the rain, heavy and in the face, then gradually reducing but not ever stopping completely on the way back!”