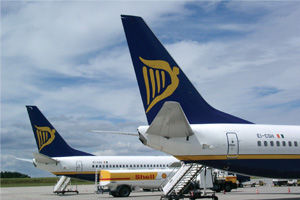 The no-frills airline is to recruit pilots, cabin crew, engineers and sales and marketing staff as it expands its fleet from 270 to 305 aircraft across Europe. Some new jobs will be available in Manchester.

Five new bases in Manchester, Billund, Wroclaw, Palma and Paphos have already been announced as Ryanair expects traffic to grow from 76 million passengers in 2011 to 80 million this year.

The move will increase the carrier’s 8,000-strong workforce by almost 10%.

A spokesman said: “Ryanair looks forward to another strong year of fleet and traffic growth in 2012 and we are proud to create over 1,000 new jobs in Europe.”