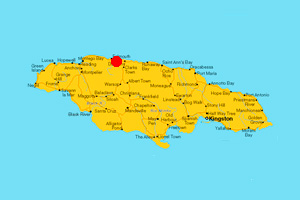 Eight people have been arrested in connection with the fatal shooting of an eight-year-old British girl in Jamaica, according to reports.

Imani Green from south London had been visiting relatives in the town of Duncans, in the north of the country, when a lone gunman opened fire on Friday.

Deputy Supt Steve Brown, from Jamaica’s police force, told the BBC the arrested people were being questioned. “We have taken people into custody as we search for a motive for the attack,” he said.

“We’ve heard about gang warfare but we find it a bit difficult to believe because where the incident took place it is a sleepy community, nothing happens there, it’s an isolated incident.

“But it could be linked to a number of things and we are looking at all possibilities and following all the leads that we are getting.”

He added: “We are confident we will make a breakthrough very, very soon.”

The young girl was with relatives at a café owned by her cousin when a gunman entered and opened fire following an argument.

Three others were injured in the shooting and taken to hospital for treatment but are thought to be in a stable condition.

Imani, from Balham, arrived on the island with her mother shortly before new year to stay with relatives.

Jamaica’s security minister Peter Bunting told a local newspaper: “The senseless killing of a young, innocent child must outrage all well-thinking Jamaicans, and cause us to join our security forces in an intensified effort to rid our communities of criminals.”

The Foreign & Commonwealth Office confirmed it has been providing consular assistance and liaising with local authorities since the shooting on January 11.

FCO travel advice to Jamaica remained unchanged. The country attracts around 180,000 British visitors a year with most visits being trouble free.

But the FCO says there are “high levels of crime and violence” particularly in the capital of Kingston.